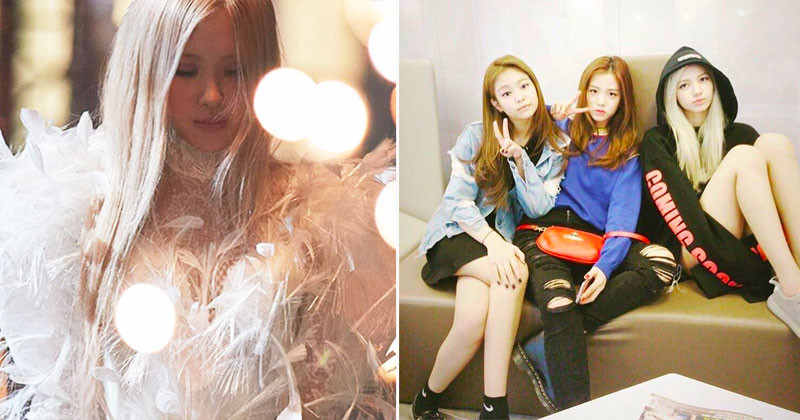 She also reveals how each member showed their support.

BLACKPINK Rosé recently released her solo album, R. Although it is an album she is extremely proud of, she couldn’t help but reveal that it only made her treasure her members more.

"The members did the things I had to do, together with me. But (in a solo album), the things I have to do and take responsibility for increases as well, so I think I hugely felt that empty space. While preparing for the solo promotions, I felt it even more so that there’s so much to learn from while promoting as a group."

Of course, the girls of BLACKPINK thoroughly encouraged Rosé in the preparation process for her solo.

"The members each cheered me on a lot. I felt just how much strength others’ support gives you. I felt even more reassured. Jennie unnie gave me gifts cutely and video called me. Jisoo unnie told me how happy she was (for me) while saying I should do everything I want to during these promotions. Lisa also went around saying to the staff how cool I was. I was very thankful."

What a sweet friendship these girls share! Make sure to catch “On The Ground” below and show some love.

With the upcoming release of her first solo EP, the co-member of Jennie, Jisoo, and Lisa is expected to achieve more feats on various online platforms such as YouTube and Instagram.

The South Korean songstress is confirmed to appear and perform in three shows ahead of her official solo launch. Reports have it that BLACKPINK member Rosé would perform her new tracks titled "GONE" and "On the Ground" on the forthcoming episodes of "Inkigayo," "M Countdown" and "Show Music Core."

If that is not enough, BLACKPINK member Rosé is also set to guest in an upcoming episode of "Tonight Show Starring Jimmy Fallon." It was claimed that the "Lovesick Girls" singer would be singing her new songs in the show on March 16.

Aside from BLACKPINK member Rosé, other guests in the imminent "Tonight Show Starring Jimmy Fallon" are Madelaine Petsch and "Sherlock" lead star, Benedict Cumberbatch. Most, if not all, fans can recall that the "Ice Cream" hitmaker last appeared on the said show in June 2020, alongside Jennie, Jisoo, and Lisa.

BLACKPINK member Rosé is also expected to highlight her admirable friendship with Hyeri on the "Knowing Bros" show. The two girls would totally make the viewers laugh with their unique sense of humor and undeniable wit. The forthcoming appearance of BLACKPINK member Rosé on "Knowing Bros" would be her third time. It would also be the very first time that the songstress would be gracing the show sans Jennie, Lisa and Jisoo.

Meanwhile, BLACKPINK member Rosé is projected to hit headlines in the coming days after her official solo debut. The "How You Like That" singer is also expected to reach more feats as her new tracks would be made available on several platforms such as YouTube, Spotify, YouTube Music, Apple Music, and more.

As of today, BLACKPINK member Rosé already has a total of 36.9 million followers on Instagram. This number is foreseen to increase in the coming days as more and more people discover her singing prowess. The statistics could even surpass 37 million or 40 million very soon.

There have been speculations that BLACKPINK member Rosé would be launching her very own YouTube channel very soon. Since the songstress and her agency did not provide an exact date as to when would this happen, there have been speculations that she could launch it on the day of her solo debut. Should this happen, the yet-to-be-launched YouTube channel of BLACKPINK member Rosé could amass millions of followers in just a few hours.

>>> See more: Fans Are Shocked At Where BLACKPINK Rosé Filmed Her "On The Ground” MV

The first video teaser of BLACKPINK member Rosé's "On the Ground" track, on the other hand, already garnered more than 14.8 million views. It also generated more than 1.7 million likes and 191,249 comments. The official music videos of her solo tracks are expected to surpass these statistics.

In fact, her second teaser for the "On the Ground" music video has already garnered more than 11 million views with 1.4 million likes and more than 106,983 comments.