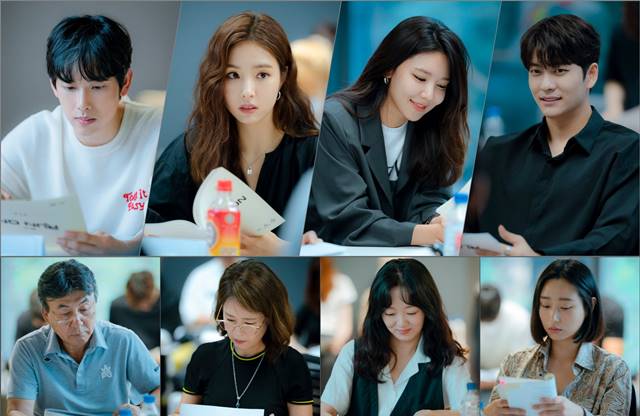 The photos taken at the first script reading session for JTBC's upcoming Wednesday-Thursday drama 'Run On' has been rel...

The photos taken at the first script reading session for JTBC's upcoming Wednesday-Thursday drama 'Run On' has been released.

'Run On' is a romance drama in which people from different walks of life communicate and establish relationships in their own languages. They run towards love in an era where communication is difficult although they're all speaking the same Korean language.

Director Lee Jae Hoon stressed the importance of beautiful communication, saying, "I will faithfully capture all the actors here talking and listening to the truth," and announced the start with a warm promise, "All the actors and staff will do their best to make us feel that we really worked with good people until the last shooting."

Im Si Wan, who plays the role of Ki Sun Gyeom, a field athlete who was born with many things, has already deeply immersed into the character from the moment he opened his first line.

Everything was straight and sincere, and the serious aspect of Sun Gyeom became more three-dimensional in the calm and stable acting tone of Im Si Wan, including his gentle eyes, facial expressions, soft voice, and gentlemanly behavior.

Shin Se Kyung turned into Oh Mi Joo, a movie translator who tells a story in her heart at the right temperature every moment, giving off an honest and simple charm. She added natural acting and ad-libs needed at the right time.

Choi Soo Young plays the role of Seo Dan Ah, the heir of a sports agency. Despite the overflowing leisure, the character with firm determination mingled with the cool charm of Choi Soo Young, foreshadowing the birth of a perfect character.

Kang Tae Oh's handsome face is filled with kindness. His role of Lee Young Hwa, an art student with good manners, is expected to draw attention.

The production team said, "Thanks to the harmony of the actors formed early, the theme of 'Run On' has come to life more deeply. Please wait and see if the characters who will communicate in different languages will be able to finish their love this winter."

'Run On' will premiere in December following 'Private Life' on JTBC.