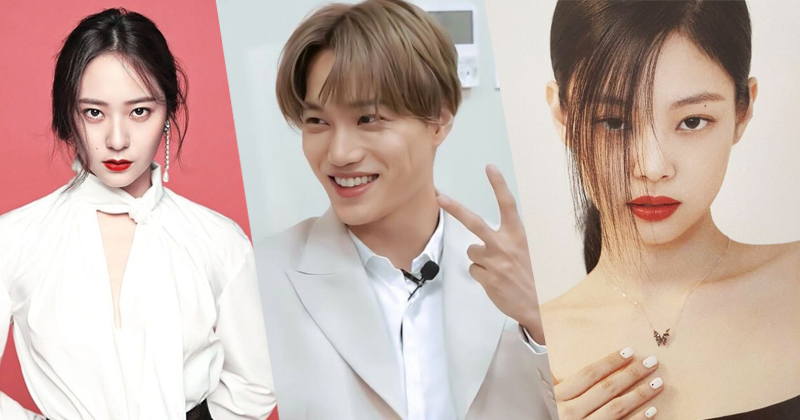 During 8 years of operation, the boys of the most popular Korean group - EXO - have repeatedly rocked Korean showbiz be...

During 8 years of operation, the boys of the most popular Korean group - EXO - have repeatedly rocked Korean showbiz because of their dating news.

Launched in 2012, after 8 years of operation, up to now, EXO is one of the groups with a respectable position in the Korean music industry. Despite experiencing a lot of turbulence related to the member change, the boys still maintain their performance and continuously satisfy fans when they release quality, well-rounded music products.

The higher the popularity, the proportional to the private life of the EXO members is also the media and the audience ‘cares’. In particular, about love, 3/9 members of EXO had to admit they were in a relationship. In addition, the rest of the members are also constantly questioned about dating other female artists.

However, when looking back at those who used to be official girlfriends or have rumors about dating EXO, it is easy to see in common among these girls: they are all talented and talented idols in showbiz; Only one of them is from outside the entertainment industry.

In 2014, while EXO was shocked when member Kris left and sued SM, Dispatch released a message that said 'crazy': singing Baekhyun is dating SNSD leader Taeyeon. Before that, Baekhyun has repeatedly confessed his passion for Taeyeon, and the guy is considered 'the luckiest fanboy in the world' when he can successfully date his idol.

However, this love did not receive the support of the fans from both sides. The pressure from the public, plus the dense schedule, made the couple to quickly announce their breakup. After this dating scandal, Baekhyun and Taeyeon became much more careful about sharing private life on social networks.

The second member of EXO's love story is Kai - the dance king 'in the group. Just like Baekhyun, Kai is dating a colleague of the same company, Krystal - the youngest brother of f (x). Contrary to the fierce reaction like the Baekhyun - Taeyeon couple, Kai - Krystal received a lot of support from fans on both sides because they were extremely matched, as well as had a long time being close friends before the dating.

However, this talented and talented couple soon 'go everyone else' for the same eternal reasons as other idol couples: busy schedules. Until now, Kai - Krystal still makes fans regret and hope that both can return to be friends.

The shocking couple Kai - Jennie are the two characters who received the honor of 'opening the bowl' of the entertainment industry in 2019. Even the fans of both were extremely surprised because, before that, both seemed as if there was no connection in the public eye, even Jennie was continuously assigned with other idols such as Mino (WINNER), V (BTS), …

In terms of double beauty, Kai - Jennie is not inferior when he is the main dancer in EXO and she is the center of BLACKPINK. Both are also representatives of cult fashion brands such as Gucci and Chanel. However, just after a month of dating announcement, Kai and Jennie officially said goodbye because their work was too busy.

In the early years of operation, member D.O. EXO has many times encountered suspicions of dating a female idol who is older than Sojin (Girl's Day). Fans repeatedly questioned that the two have their own outing, as well as the suspicious coincidence of their favorite songs, …

However, because there is no official information but just rumors circulating in the fan community, D.O.'s dating suspicion. and Sojin was quickly extinguished and rarely mentioned later.

As one of the members with the largest number of fans in EXO, Chanyeol's dating is a lot of 'interested' by fans. At the beginning of 2019, on some online forums in Korea, rumors spread that Chanyeol was dating Joy (Red Velvet) when they saw two people walking together from the car to the hotel lobby while traveling to Chile. preparing for SM's joint concert.

Previously, this couple was questioned by fans many times since 2015. Even, some people were even asserted that this rumor was too strong, affecting Red Velvet at that time when they debuted, so SM 'pushed' Joy to join 'We got married' with Sungjae (BTOB) to limit rumors.

On January 13, Chen surprised all of his fans when he officially announced that he was getting married and became a father. The male idol shared, he thought carefully before deciding to announce the good news to fans. It is known that Chen's fiancé is a girl outside the entertainment industry, currently pregnant with their first child.

As a member of the most popular Kpop group, his solo career is also promising, Chen's public decision is truly a bold and reckless one. However, he received countless congratulations from his colleagues, the group as well as the fans.