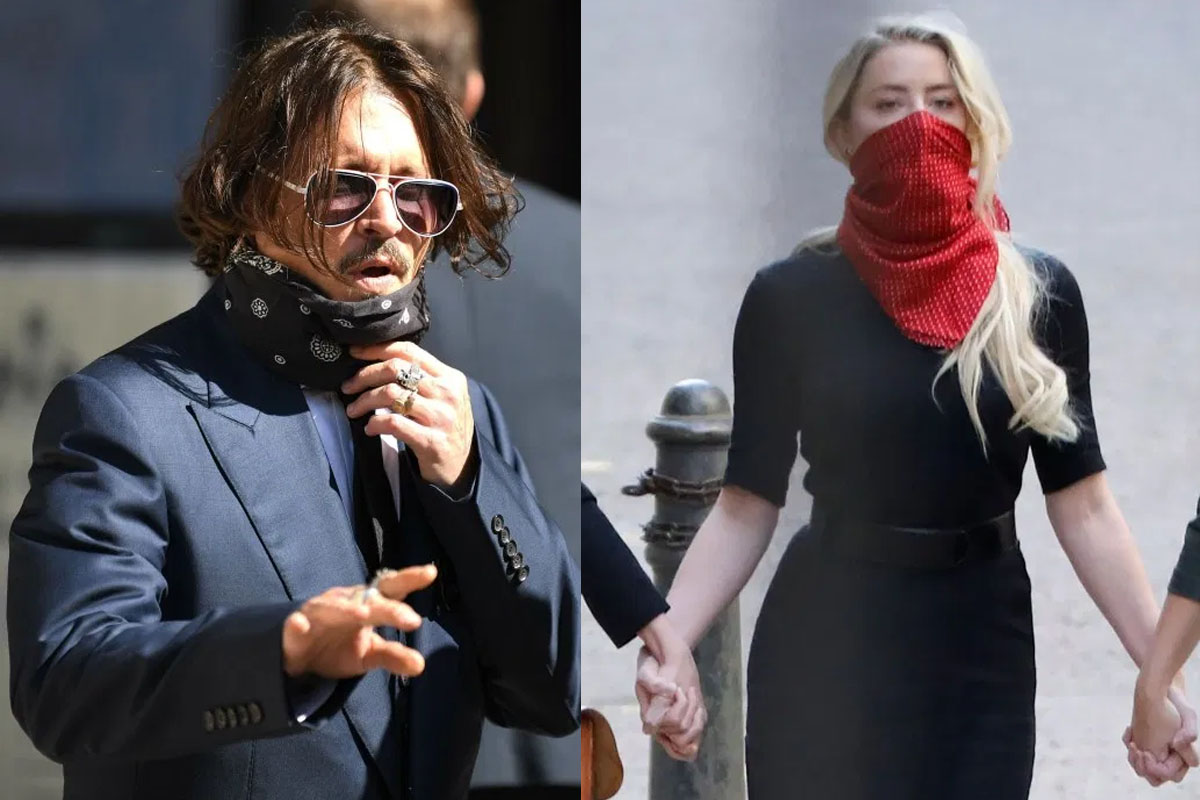 Hollywood star Johnny Depp and Amber Heard arrived at the High Court this morning as they came face-to-face for the sta...

Hollywood star Johnny Depp and Amber Heard arrived at the High Court this morning as they came face-to-face for the start of a blockbuster three-week trial over claims he beat his estranged wife.

Lawyers for the warring former couple have been working to make sure they arrive at the High Court at separate times for the showdown to ensure there is no risk of them bumping into one another outside.

Depp is suing The Sun newspaper and its executive editor Dan Wootton over allegations the actor behaved like a 'violent monster' towards his former wife during their troubled two-year marriage.

The Pirates of the Caribbean star, 57, will spend three days in the witness box at from tomorrow to strenuously deny he ever hit the actress. Both Depp and Heard, who haven't been seen together for three years, are set to attend each day of the trial.

Pirates of the Caribbean star Depp failed in a bid last week to have Heard banned from the court until she was called by NGN as a witness - meaning she would be prevented from watching her ex-husband give evidence.

It means Miss Heard will sit close by - 'her eyes boring into him' - as he answers questions about their turbulent married life, a source close to her said last night.

Depp has spent the past two days being 'prepped' by Adam Waldman, his high-flying American lawyer. Both arrived in London over the weekend to prepare for the trial, which will also see a number of Hollywood figures giving evidence, including Depp's former partners Vanessa Paradis and Winona Ryder.

In court, Depp is being represented by David Sherborne while Adam Wolanski QC is appearing on behalf of News Group Newspapers (NGN) publishers of the Sun.

Depp, 57, is suing The Sun newspaper for calling him a wife beater in an article in April 2018. His other ex-partners, actress Vanessa Paradis and Hollywood star Winona Ryder, have leapt to his defence to say they never experienced any domestic violence.

Depp's high-powered legal team accuse Miss Heard of making up her claims, and say she assaulted the actor. Miss Heard - who will be newspaper's star witness - claims Depp hit and choked her while in the grip of addictions to drugs and alcohol.

In Australia in 2015, she outlined a 'three-day ordeal of physical assault' in which her injuries included a broken lip, swollen nose and cuts all over her body, allegedly after Depp took out a bag of MDMA (ecstasy).

She will sit beside her in court and has been spending several hours each day preparing her for the witness box since she arrived in Britain from her home in California last week.

An insider said: 'They're both going to spend a long-time giving evidence and their credibility as witnesses is what the whole case rests on. Lawyers from both camps have been working them hard to ensure that they get all their points across and are consistent in what they say.

'They're bracing themselves for a grilling and once they take the stand, the lawyers are going to pick holes in their testimony. Giving evidence is going to be challenging for both of them and the trial is going to be a real-life Hollywood blockbuster.'

The trial hangs on 14 separate incidents of domestic abuse which lawyers for NGN argue demonstrate that the article by Wootton was not libellous.

It is estimated that the trial is costing Depp and NGN around £1milllion each in legal fees.

The months leading up to the trial have resulted in a serious of sensational allegations being made public as both sides argued during pre-trial hearings over material that could or could not be made public.

During one hearing, it was revealed that Depp sent texts during his relationship with Heard saying he would 'drown' and 'burn' his wife then 'f*** the corpse.'

NGN lawyers have been wading through 70,000 texts, some of which will be submitted as evidence to show that Depp was violent towards Heard.

In another hearing, Depp's lawyer alleged that Heard had 'two extra-marital affairs' or 'extra-relationship affairs' with Elon Musk and James Franco while she was going out with or was married to Depp. Both men have denied the claims.

The High Court hearing will also hear details of a 2015 trip to Australia by Depp and Heard during which he sent messages asking for drugs, claim the Sun's lawyers.

They will also allege that he waged a 'three-day ordeal of physical assaults' on Heard and 'held her hostage' while they were in the country.

Depp is also suing Heard for $50m in the US over a column she wrote in the Washington Post in which she described herself as a 'domestic abuse' victim. Although Depp was not named in the column, he claims it defamed him.

His libel claim against the Sun could have a major impact on the outcome of the American hearing.

The UK case was due to start in March but was delayed by the coronavirus crisis. With lockdown easing, it is one of the first high-profile cases to go ahead at the Royal Courts of Justice.

Unlike recent cases, it will not be held over video conferencing, but in the courtroom in person, with the Hollywood stars taking their turns in the wood-panelled witness box.

Miss Heard, who lives in LA, had to arrive in the UK a fortnight ago to comply with the UK's quarantine rules. Depp has been staying in Paris.

To maintain social distancing, five courtrooms have been set aside for the case. The press and public will be allowed to watch proceedings from adjacent courtrooms on a video feed from Court 13.

Mr Justice Nicol has previously ruled that parts of Miss Heard's evidence, relating to allegations of sexual violence, will be heard in private.

In pre-trial hearings, Depp's barrister David Sherborne said his client denies that he has ever hit any woman.

Miss Heard met Depp on the set of 2011 comedy The Rum Diary and they married in LA in 2015. They divorced in early 2017, with Miss Heard receiving a £5.3million settlement out of Depp's reputed £400million fortune.

In a hearing last week, it was claimed that text messages showing Depp begging his assistant for 'happy pills' and 'whitey stuff' - which lawyers claim meant ecstasy and cocaine - were sent just days before he allegedly assaulted his wife.