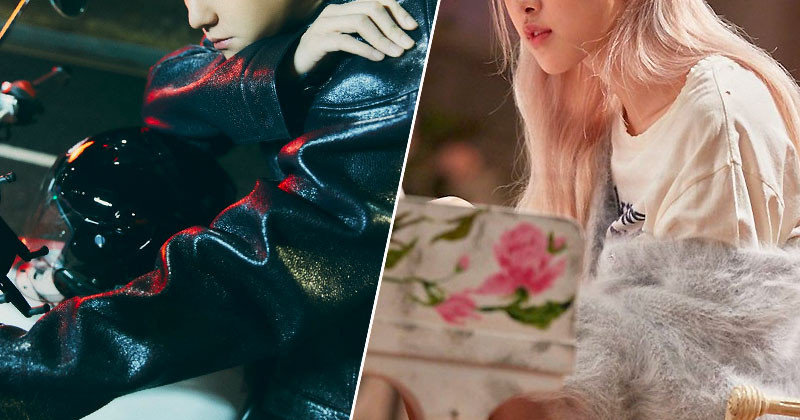 On Tuesday, Apr. 3, Vogue Korea released an article praising these four idols as shining stars both in their respective groups and as solo artists. Want to know who they selected? Then keep on reading!

Starting Vogue Korea's list is BLACKPINK's main vocal, Rosé. The idol made her solo debuted on Mar. 12 with her debut single album "-R-." Her debut song, "On The Ground," is receiving praise both domestically and internationally. In South Korea,

In the United States, "On The Ground" peaked at number 70 on the Billboard Hot 100, making it the highest-charting song by a female K-pop soloist.

"On The Ground" and "-R-" peaked at number one on both the Global 200 and Global Excl. U.S. charts. With that, Rosé broke a Guinness World Record as the first artist to reach number one on a Billboard Global 200 chart as a soloist and as a member of a group.

"On The Ground" also broke the record for most-viewed YouTube music video in 24 hours by a K-pop soloist.

The next and final female idol mentioned by Vogue Korea is Red Velvet's main vocal, Wendy.

Wendy debuted as a soloist on Apr. 5 with the debut mini-album "Like Water." Her debut title track is of the same name. Following the release of her mini-album, "Like Water" topped the iTunes Chart in 30 countries, making Wendy the female K-pop soloist with the most number ones in the said chart.

"Like Water" also debuted at number one on the iTunes Albums Chart, making Wendy the fifth female K-pop soloist to achieve this feat.

A day after the release of "Like Water," Hanteo Chart reported that the mini-album sold 70,847 copies, making it the fifth-highest first-day sales on the said chart. Wendy joins the likes of Taeyeon, IU, and BLACKPINK's Rosé.

The first male soloist praised by Vogue Korea is Baekhyun. The EXO/SuperM member made his comeback as a soloist on Mar. 30 with his third mini-album, "Bambi." Hours before the mini album's release, it was revealed that "Bambi" had surpassed 833,392 pre-order sales. This makes "Bambi" the most pre-ordered album by a soloist in South Korean history.

According to Hanteo Chart, Baekhyun sold over 868,000 copies of "Bambi" during the first week of its release.

"Bambi" is Baekhyun's final release before he enlists for the military on May 6. On Apr. 3, the "Candy" singer revealed to Dispatch that he was going to be serving as a public service worker instead of an active-duty soldier due to his hypothyroidism.

The next and final male soloist applauded by Vogue Korea is Yoon, a member of WINNER. Following his solo debut in 2013, the male idol has finally returned to the music scene as a soloist after eight years on Mar. 29 with his first studio album titled "Page," which contains the title track "IYAH."

"Page" contains a total of twelve songs that show Yoon's rich vocals and charms. The male idol wrote and composed all of the songs on the album and was highly involved in the arrangement to enhance the album's overall quality.

Albums from female K-Pop soloists have become quite popular in recent times, although there have been several released half a decade or more ago that did remarkably well too! The majority of the best-selling albums in this category are from two artists, though there are several others on the list as well. Here’s a look at the 17 best-selling female soloist albums in Gaon‘s history, determined by their sales data!

17. A Flower Bookmark by IU

15. Dark Side of the Moon by Moonbyul

4. My Voice by Taeyeon

When the weather gets warmer, we know another summer's coming, a summer with beaches, campfires and long-distance travel. And wouldn't it be sad if there weren't some cheerful music to accompany those fun? The following vibrant songs will be good additions to your playlist in this hot summer!

The modern and vibrant music from KARD makes any listener dance right from the first tunes. All are blended with the bright blue sea and white sand of the MV, the symbol of summer.

Honestly, most of ASTRO’s songs could make this list, but 'Crazy Sexy Cool' is the one worth mentioned the most.

MONSTA X are not all about sexiness, they’re the kings of duality, who really served the industry one of the best summer songs that year with 'NEWTON.'

What could be better than spending time with friends in summer? That’s what 'Let’s Hang Out' is all about.

Although 1TEAM already disbanded, their debut song 'VIBE' shouldn't be forgotten, as it has that cheerful atmosphere that every summer song should have.

'Wave' contains that summer vibe even in its title. The track will transport you to the seaside in an instance no matter where you might be.

PENTAGON’s latest title track, 'DO or NOT,' can make you wanna dance, a perfect addition to your summer playlist.

Stray Kids' 'Blueprint' is all about fun, paired with optimistic lyrics to lift you up this summer.

Summer is not just sunny days on the beach, it can be a holiday night, just like in this song from SEVENTEEN.

ONEUS’ 'Airplane' guaranteed to take you on a flight of joy, and isn’t that what we want for summer?

The lyrics to this bop by ONF combined with its catchy tune can stuck in your head throughout this summer.

Yes, DAY6 aren’t your typical boy group, and this song is not that new, but this list wouldn't be complete without 'I’m Serious'.

The video for 'Take Me Higher' are as colorful as its melodies, promising to enrich your experience.

'Pump It Up' wasn't released in summer, yet it retains that carefree, fun feeling of the season.

Summer can be about love, too. And Eric Nam’s 'Can’t Help Myself' us here to give us that romance feelings. He's a soloist, but we need him in the list.