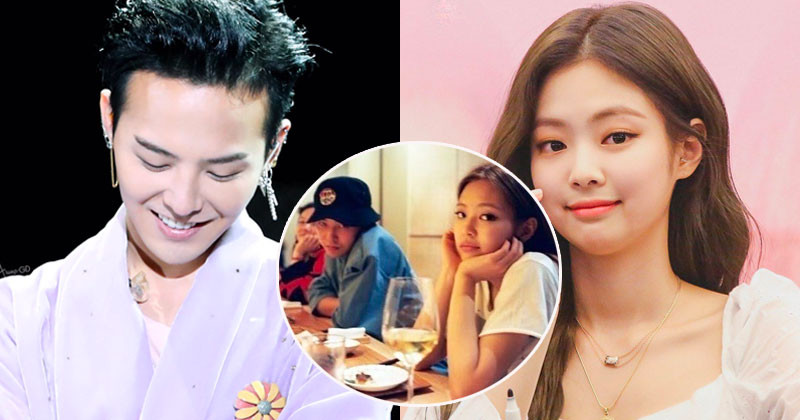 Here’s why YG Entertainment may be so quiet.

Following the report of BIGBANG G-Dragon and BLACKPINK Jennie having been in a relationship for one year, a close friend of both artists shared why YG Entertainment may be so quiet about acknowledging the news.

"G-Dragon and Jennie weren’t hiding their relationship. They introduced each other as their boyfriend or girlfriend, and they would meet up together with their friends.

I think it was burdensome for the two to admit their relationship, considering their various personal situations." - Friend 1.

A different friend shared another reason why it might be so difficult for the two to acknowledge their relationship.

"It won’t be easy to acknowledge the relationship rumors, since they are in the same agency and a junior-senior within the same industry.

I don’t think they want to have the name modifier of ‘G-Dragon’s girlfriend’ or ‘Jennie’s boyfriend’, which may happen after confirming their relationship." - Friend 2.

Another noteworthy thing pointed out was that with all of G-Dragon’s rumored relationships, he has not publicly confirmed any of them. G-Dragon himself personally believes that it isn’t something that he is obligated to let the public know.

"It’s a personal issue, whether to acknowledge or not acknowledge a relationship, but if the other party is a celebrity, I think the potential damage will be much higher from the perspective of the female.

The public does have a right to know, but I don’t think I am obligated to make it public." - G-Dragon on Radio Star.

YG Entertainment has continued to stay on its course, stating that because it is the idols’ private lives, they will not be making a statement.

As reported by Dispatch, in 2012, Jennie made her face known in a music video by G-Dragon. She starred as the heroine of the MV 'That XX', from his solo album 'One of a Kind'.

Their good relationship continued the following years. She participated in the title track of G-Dragon's 2nd full-length album, 'Black', as a featured artist. In 2013, G-Dragon was Jennie's idol, and Jennie was G-Dragon's muse.

BLACKPINK Jennie fell in love. Her lover is her idol, G-Dragon. The two are representative idol singers of YG. They have developed into a senior-junior couple. They have been dating for a year now.

Dispatch witnessed a secret meeting between G-Dragon and Jennie. Their date location is (mostly) the Hannam-dong Luxury Villa, where G-Dragon lives - it was the best place for secret love.

First, G-Dragon's penthouse boasts an independent parking system. There is a separate parking lot in the villa's public parking lot. It has to go through two stages of authentication from passing through the main gate to parking.

Jennie registered to G-Dragon's villa, too. She can pass through the main gate without any certification procedures and enter a dedicated parking lot. She then took a private elevator to the penthouse.

Jennie's dating routine was consistent. During BLACKPINK's promotions, she visited G-Dragon's house first when she finished a schedule. The formula "Schedule->Date->Return" was repeated. She maintained a similar pattern when there was no activity.

Their relationship is an open secret within YG. First of all, Jennie's manager is in charge of "driving" - dropping Jennie off at G-Dragon's and bringing her in. Sometimes, G-Dragon's manager takes over the job.

Last year, as Jennie filmed the music video for BLACKPINK's full album, G-Dragon made a surprise visit to the scene. It was not only an encouragement from a YG senior to his junior, but also G-Dragon's affection for Jennie.

On January 31, the day of BLACKPINK's online concert, Jennie left G-Dragon's house earlier in the day and left for the concert hall. Dispatch could see their dating routine again. G-Dragon's car was also found in KINTEX, where the concert took place.

"In YG, several people are aware of their relationship," a close aide to the two told Dispatch. "Jennie's mother knows about her relationship with G-Dragon."

Whenever rumors of a romantic relationship broke out, YG would stay silent. However, the relationship between the two, which Dispatch witnessed, is a clear love. Instead of obvious responses such as "they are close senior and junior," Dispatch expect a better position from YG.

Regarding the news, YG Entertainment said on February 24 that, "It is difficult for the company to confirm the private personal life of the artists. We ask for your understanding."