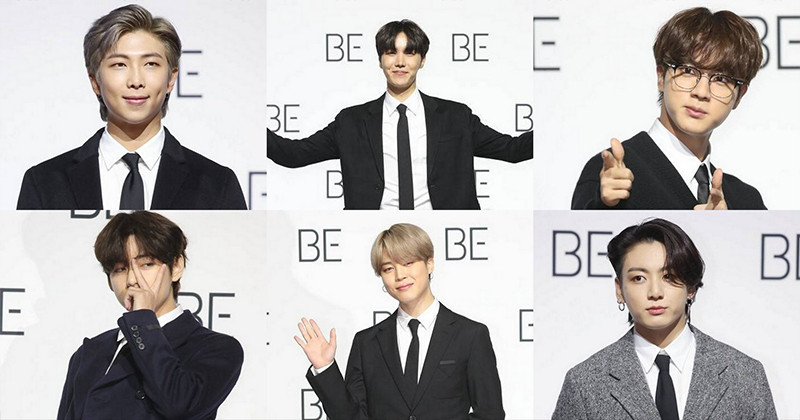 "We had a very embarrassing and empty year, and I feel frustrated and sad, but this album honestly expressed our feelings. I hope many of you will sympathize with us and comfort each other," BTS Jin said.

On the morning of November 20, BTS held a global press conference to mark the release of their new album 'BE (Deluxe Edition)' at Dongdaemun Design Plaza (DDP) in Seoul. During the event, the BTS members opened about surviving the COVID-19 period, as well as sharing remarks on their upcoming album 'BE (Deluxe Edittion)'.

Leader RM said, "I hope we can go back to our normal and natural lives as soon as possible, as everyone wants. This album is our honest story about those feelings."

Jin said, "I think it was a time to look back on the present and myself, because we focused on expressing the emotions we feel."

The title track 'Life Goes On' contains a key message from the album.

Jimin shared, "RM said, 'Wouldn't it be nice to talk about how to maintain life in a changed daily life, with the meaning that life will continue no matter what happens?' and all the members agreed. And we've gradually expanded our scope to make this album."

Jimin, who is in charge of communication between the members and the company as the project manager, said, "The album title 'BE' is an open word. We thought it would go very well with this album because we wanted to tell many stories."

About the title track 'Life Goes On', RM said, "It's obvious in some ways, but it's a track that tries to unravel the stern truth in a warm and BTS-only color. BTS then started thinking and feeling about what we can and should talk about now. In summer, we want to get rid of the gloomy mood with exciting discos. If you've listened to 'Dynamite', 'Life Goes On' is a bit heavier, but at the same time, it's a song that gives us our own comfort in a firm, soft, and serious way."

They shared what stands out in the process of producing the album is that it was revealed to fans as it is on YouTube and V Live, sometimes through live broadcasts, sometimes through recorded footage, making fans feel like they are on a working session with BTS.

RM explained, "The production process is normally completely under wraps, but for the first time, we've shown you what we're thinking about. Even in this non-face-to-face situation, it made our fans feel that it was an album made together."

As J-Hope shared, "It's a very meaningful album for us because we've participated and been involved in a lot of things," the members participated in the entire production, from the planning stage to concept planning.

In addition to Jimin, there were project managers in each field, including V, who took on the visual part, and Jungkook, who directed the music video.

V revealed, "I wanted to show the members a very natural picture of each other and their daily lives, so I came up with a lot of comfortable images," and added, "When I went on a trip with them, I took a Polaroid camera with me, and I got the first idea from there because the regular and natural pictures came out really pretty."

"I thought I wanted to capture the daily life of a young man in his 20s rather than the usual splendor on stage in the concept clip. In fact, I remember taking a mirror 'selfie' like a group of friends, chatting, and having fun." J-Hope continued.

Jungkook, who has shown interest and talent in the video making, said, "I'm still too embarrassed to be a director," but added, "I've also dreamed of filming a great music video in the future based on this opportunity."

"I thought reality and sincerity were important," he said. "The tour was canceled due to COVID-19, so I wanted to express my longing and feelings for ARMY."

The press conference was held offline for the first time in a while in compliance with the social distancing guidelines. Suga, who is recovering from a recent shoulder surgery, was unable to attend.