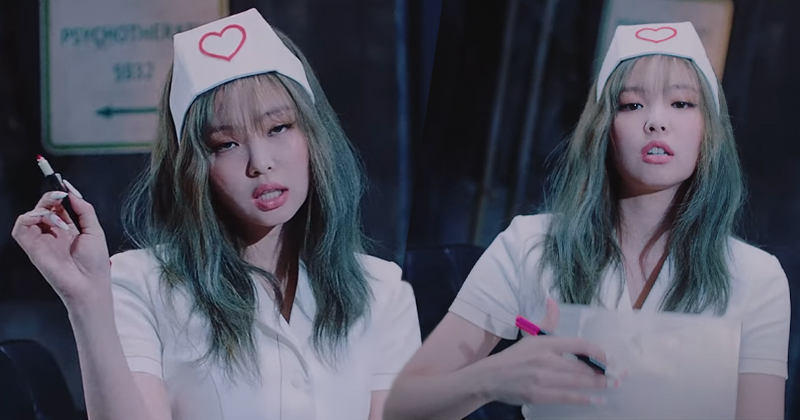 Recently, Jennie (BLACKPINK) has become the center of a controversy regarding the 'Lovesick Girls' MV. Specifically, ma...

Recently, Jennie (BLACKPINK) has become the center of a controversy regarding the 'Lovesick Girls' MV. Specifically, many people expressed dissatisfaction when the stylist and the company gave the female idol an inappropriate outfit during the nurse scene: a miniskirt that exposes her thighs, a pair of red high heels, and long nails... People think that this was a way of 'sexualize' the image of nurses - a job that is more important now than ever as they are giving their best to prevent the COVID-19 pandemic.

Once it seemed that this controversy was only within the scope of online forums, but then suddenly on October 5, the Korean Health and Medical Workers Union (KHMWU) got involved. In their statement, KHMWU said that the 'sexualization' of Jennie's portrayal of a nurse needed to be rectified and asked YG to take appropriate measures.

Regarding the announcement of the KHMWU, YG immediately responded that the nurse scene was just a musical concept and did not have any other negative intentions. However, the BLACKPINK's agency also said that they were considering whether to edit the scene out because of fear that the image of the idol would be distorted. Finally, today (October 7), YG posted a new statement saying that they have decided to delete this scene and edit the 'Lovesick Girls' MV as soon as possible.

Earlier, BLINKs (BLACKPINK fandom) had already been extremely angry as they thought YG was a coward, being afraid of netizens' criticism. That's why YG's decision to remove the nurse scene is causing a wave of fierce criticism from BLINKs across social networks. Hashtags such as #YGDontDeleteTheScene and 'Jennie' also occupied the Twitter's Worldwide Trending.

However, in the wake of the mass criticism from BLINKs, many netizens believe that the decision to delete this nurse scene is completely reasonable. Here are 3 reasons why Jennie's scene can be so controversial, and why YG has to delete it in the end.

Many K-Pop female idols transformed into sexy nurses, but why is Jennie the only one who get severely criticized?

One of the most frequently encountered questions in BLINKs' comments is: "Why are there dozens of female idols pulling off the sexy nurse concept, but BLACKPINK is the only one being criticized?". Accordingly, they showed a series of evidences to prove that there have been many K-Pop idols who transformed into nurses in a sexy way - in some cases, much sexier than Jennie, but all of them did not received so many complaints.

Netizens answered the above question with one words 'Timing'. It is true that before Jennie, there have been a lot of female idols portraying sexy nurses, but the YG girl group's controversy started because the world is in a very bad time now: the COVID-19 pandemic. This is a time when professions such as doctors and nurses must be most respected, and few people dare to use their images for entertainment purposes at this time.

In the statement of KHMWU, they also mentioned this quite clearly. The union stressed that this is the time when nurses are on the front line in the fight against the COVID-19 pandemic. There are people who see doctors and nurses as heroes.

That is why fans need to understand that this is a very 'sensitive' time for the medical industry. In addition, some fans' even said something like "Korean nurses are jealous of Jennie so they did it" or "They don't wear nurse outfits as beautiful as Jennie does". This should be stop.

Is BLACKPINK's influence also the cause?

In the statement, KHMWU said: "Nurses have been struggling for a long time to change this and in 2020, when discussions about women's rights are more intense than ever, YG Entertainment 'sexualized' the nurse image in the MV. And then this MV received 100 million views after only 3 days of its release."

Surely, we cannot deny that BLACKPINK is criticized because the group is very popular. Many netizens left comments saying that BLACKPINK is now the top girl group in K-Pop, and popularity comes with responsibility. Similar to other idols who lead the Hallyu wave, the girls have to promote the South Korea's culture and image to the world. They cannot give Korean nurses a bad image in the eyes of the world, while many nurses are struggling out there.

What many fans of Jennie in particular and BLACKPINK in general feel the most disappointed of at this time is the way YG responded to the incident. Many believe that the company does not know how to defend the artists, and yielded to the netizens' demands. However, many non-fans and even some BLINKs begged to differ.

The decision to delete the nurse scene is the best that YG can do now, no matter how right or wrong that scene was. Netizens would stop talking about the issue, so that is the right way to protect the female idols. On the other hand, no one wants a girl group that is on the rise like BLACKPINK to have a 'stain' in their career. If the scene remains, netizens will keep discussing about 'sexy or not sexy' every time it comes to the title song of the group.

Also, YG had to do this because BLACKPINK will have a comeback stage with 'Lovesick Girls' and 'Pretty Savage' at Music Core and Inkigayo next week. We all know if the controversy persists, it is possible that the group will be 'banned' from the music shows. Therefore, many BLINKs in South Korea urge international fans to stay calm because this is no longer a controversy on online forums, but big powers in the country have also begun to pay attention to the matter.

There have been many 'sarcastic' Korean articles on BLACKPINK after this incident, and Knet said that the situation is more serious than international fans thought. If the controversy persists, it will only adversely affect BLACKPINK, even the group's upcoming comeback stage. So now many fans are asking each other to stay calm and support the girls by buying their albums or streaming music instead of arguing online.

It is currently unclear how YG will edit the MV, but perhaps the agency will find a way to replace the controversial scene without losing Jennie's signature rap.

In your opinion, is it necessary or unnecessary for YG to remove Jennie's controversial nurse scene? Do you agree with the above explanations? Please share with us.