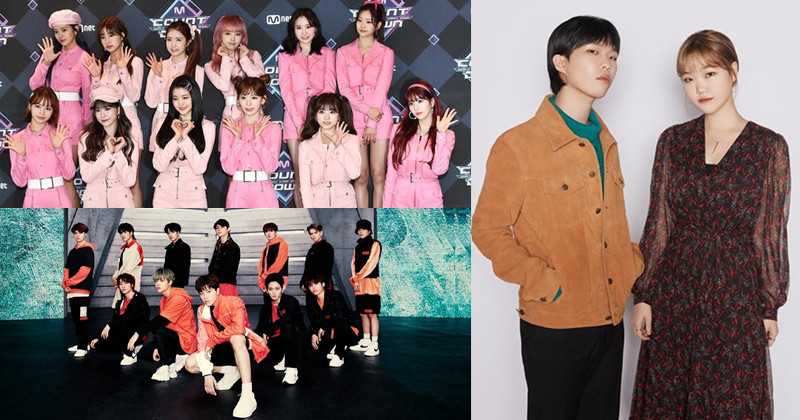 The K-Pop industry, which had been on alert after UP10TION Bitto was confirmed positive for COVID-19, seems to be taking a breath. As of December 1, all of the artists who attended MBC' 'Music Core' on November 28 and SBS' 'Inkigayo' on November 29, where Bitto performed, have conducted the COVID-19 test. Their agencies are annoncing the results one after another.

"MONSTA X's Minhyuk was judged to be negative by the COVID-19 test," his agency Starship Entertainment announced on December 1. MONSTA X's Minhyuk is the MC of SBS' 'Inkigayo', in which Bitto performed on November 29.

MBC's 'Music Core' host IZ*ONE Minju was also tested negative. IZ*ONE said on their official fan cafe, "There was no direct contact between her and the confirmed person on the day of the music broadcast on November 28," adding, "We conducted the COVID-19 test on November 30 in consideration of the artist's safety and health, and all IZ*ONE members and staff were tested negative." heir agency also announced that the upcoming release of the new album and comeback schedule will go smoothly.

April Naeun's agency DSP Media said, "On November 30, we conducted a test for April Lee Naeun and other staff members accompanying her to the music show. We inform you that everyone was tested negative on December 1." The singer is an MC for SBS 'Inkigayo'.

YG Entertainment announced, "All of AKMU, TREASURE and the staff who accompanied them were tested negative on December 1." They added, "We will put the health and safety of our artists, executives and employees first, thoroughly comply with the health authorities' quarantine guidelines, and make every effort to ensure that the scheduled activities are not disrupted."

YUE HUA Entertainment also announced WOODZ (Cho Seung Youn)'s result. "We conducted the Coronavirus test on Novem 30 in a preemptive response to the safety and health of the artist," they said. "After the screening, we have been tested negative. We plan to resume our schedule normally."

Natti also reported a negative result. "Natti and the accompanying staff immediately completed the COVID-19 test and we now inform you that they received the final negative judgment on December 1," said her agency Swing Entertainment. "Natti will resume her scheduled activities normally from December 2."

"We inform you that all members and field staff were tested for COVID-19 in a preemptive response on November 30 and that all of them were judged to be 'negative'," STAYC said on their official SNS. "We will resume the activities normally from December 2."

BlingBling also revealed on their official SNS, "BlingBling and the staff voluntarily underwent the COVID-19 test on November 30 for safety reason, and the test results on December 1 confirmed they are negative."

In a related development, UP10TION member Kogyeol was tested positive for COVID-19 after Bitto. The other members of the group have been confirmed negative.