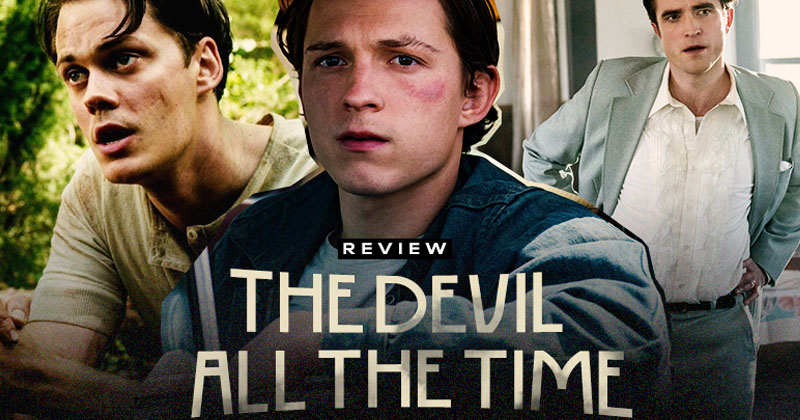 Possessing all the "big names" in the cast, the horror work The Devil All The Time makes viewers stunned by the sad and dark content.

The Devil All The Time is Netflix's latest work that brings together many bright faces in Hollywood including "Spiderman" Tom Holland, "IT clown" Bill Skarsgård, TENET star Robert Pattinson, Riley Keough, Jason Clarke, "Winter Soldier" Sebastian Stan or Mia Wasikowska. Based on the original work of the same name, the movie is the journey into the "rabbit hole" of sinful souls. With bold noir (black film), the characters in the film draw a circle full of deadlock while meeting at intersections of grim fate.

The story opens in 1945 on the Solomon Islands, sailor Willard Russell (Bill Skarsgård) meets a scene that changes his life forever: Sergeant Miller Jones is tortured and crucified by the Japanese. From then until after, Willard prayed as a means of healing for all the horrors he went through in war.

Willard's son is also the main character, Arvin (Tom Holland), who witnessed the fall of so-called happiness and faith by corruption. The appearance of a lascivious pastor (Robert Pattinson) has made the Coal River community even more unhappy. Along the way, Arvin finds the most brutal way to deal with social corruption.

Set in two locations a few hours drive inland in the 1960s, The Devil All The Time depicts the circulating and deadlocked life of the American outback. That is not only shown in the scene of the street house, but also in the few choices of the character. That was when Willard had to go to the army and forever get a wife in an incestuous town, or through the situation that Charlotte was incurable, and Arvin was not educated properly because the family was too poor.

There, the distorted mental portraits of those who "need God" are drawn by their violent and calm traits. A murderous couple forced their victim to take a nude photo before killing them. The parish priest killed his wife with the belief that the light of God would revive her. Another parish priest used the innocence of his sheep to rape them. The police chief accepts bribes as is common in the district. Trapped in the midst of all these madness is Arvin and poor family, caught in tragedy when innocence is taken advantage of, kindness misunderstood.

Throughout the work is a story of faith and sin. The Lord becomes visible, visible in the cross behind Willard's house, in the luxury car of the parish priest of Preston, in the pictures of the approaching death, with Carl happily pointing the camera at the face " his prey. Each character finds his or her own gospel in common prayers. Religion in The Devil All The Time becomes an invisible villain, when engulfing pious sheep in blind faith, sometimes an excuse for godlessness.

The cast of familiar faces, Tom Holland and Robert Pattinson are the stars

Outstanding among the brightest cast is Tom Holland when he plays the teenage Arvin who lives with so much injustice and tragedy. After the success of the Marvel movie universe, the young British actor is still engrossed with small and medium film projects instead of focusing on blockbuster movies. The Devil All The Time puts Holland next to "seniors" like Jason Clarke, Robert Pattinson or his co-star in Avengers Sebastian Stan. The confident and genuine acting of "Spider-Man" has become the highlight of the movie, Arvin closes the circle of fate that his father drew new hope to escape haunted land.

Besides, Robert Pattinson also made more impression when he played the role of a corrupt priest. The actress, born in 1999, Eliza Scanlen, touched the audience when she played the younger sister in Little Women, and now continues to take on a fateful role.

Containing many intricate details connecting many dates and locations, The Devil All The Time uses the narrative quite reasonably, but so the movie falls into the slow pace of storytelling. The images and sound are carefully crafted, clearly showing the colors of the old 60s in America. In the midst of that gloomy atmosphere, dark violent scenes have become the highlight of a "up hand" work by director Antonio Campos since Christine (2016).

The Devil All The Time was officially released on September 16, 2020.