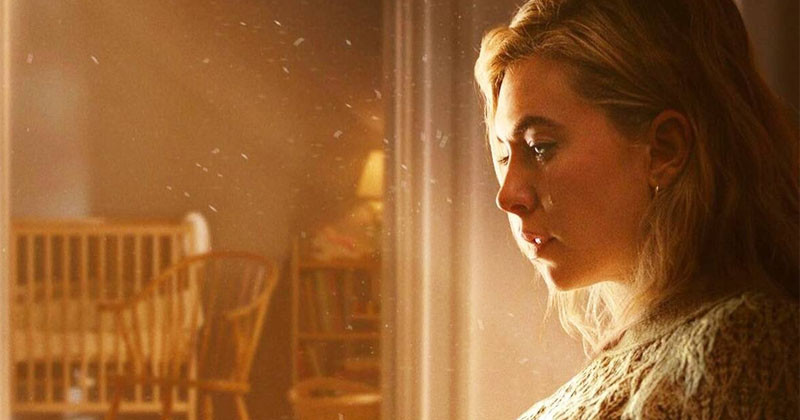 The movie Pieces of a Woman is considered one of the best and most weighty names when possessing godlike performances revolving around the haunting story of a pregnant woman.

Being named one of the strongest Oscar candidates of the year 2021, psychological drama Pieces of a Woman deserves to be Netflix's very high quality New Year's work. Although the content of the film is not too complicated, but the amazing "acting banquet" of the stars including Vanessa Kirby, Shia LaBeouf, Ellen Burstyn is more than enough for Pieces of a Woman to become a work of art. Most worth seeing of the year. Many major newspapers also predict that Vanessa Kirby must definitely be nominated for an Oscar thanks to her character, especially after the 20-minute birthbirth segment with long, specific machines.

The hauntingly expensive opening, affirming the work's place on the prize track

The film opens when the character Martha (Vanessa Kirby) comes to the office to give birth, gracefully waving to her colleague with a big belly. She got in the car of Sean (Shia LaBeouf) - her partner to go home, preparing for the well-prepared home birth. The next scene is the film's most haunting, most powerful moments - and if you want to really experience it, you can pause and check out Pieces of a Woman before reading this article.

Martha must change midwives at the last minute. Eva (Molly Parker) is the alternate midwife, appearing with a warm smile and professionalism, dedication that few can doubt. Martha fell in bed for about 25 minutes, with carefully designed camera angles with the actor to deliver the most realistic, meticulously staged footage of the film. She constantly burps, screams in pain, moves from room to room and the camera follows the character incessantly - giving the audience the feeling of being "peepers" in private moments. and most touching of the character. Vanessa Kirby's godly acting will also amaze the audience when she reaches the unifying emotions with just her gaze or the dullness of the pain in her face - and it even pulls out the pain. main words in the mind of the viewer.

Regrettably, from then on, Pieces of a Woman's rhythm was somewhat sluggish and sluggish, as the piece followed the lives of Martha and Sean months after their young daughter died prematurely. Martha is becoming more and more distant from the people around her, Sean is desperate in the increasingly cold home and gradually returns to his calf life. Elizabeth (Ellen Burstyn) - her biological mother is always contemptuous of her son-in-law, trying to interfere in everything.

The iconic nature of the film is also arranged quite obviously. Sean is a construction worker, but has a broken home. Martha's motherly instincts make her seek to plant the seeds, although at the same time she destroys the relationship with her biological mother. The film is filled with controversy, disagreement, and the characters' thorny silence, which bears some resemblance to Netflix's last blockbuster, Marriage Story. Therefore, if you are not familiar with the psychological and academic drama series, the audience will easily feel tired and negative when enjoying. In return, Pieces of a Woman delivers the heroic portrayals of the main actors - to an amazing extent.

Overall, Pieces of a Woman is a formidable name on the 2021 awards track. Not only does it bring out a woman's struggles, it also offers a different perspective on marriages. two have become bored, tired and no longer consensus about the vision ahead. Watching the movie, the audience feels pain, fatigue, sympathy and brokenness as the name of the work.

Pieces of a Woman opened at Venice International Film Festival on September 4 and was praised by experts. The work was released in a number of US theaters on December 30, before officially being shown on Netflix from January 7.