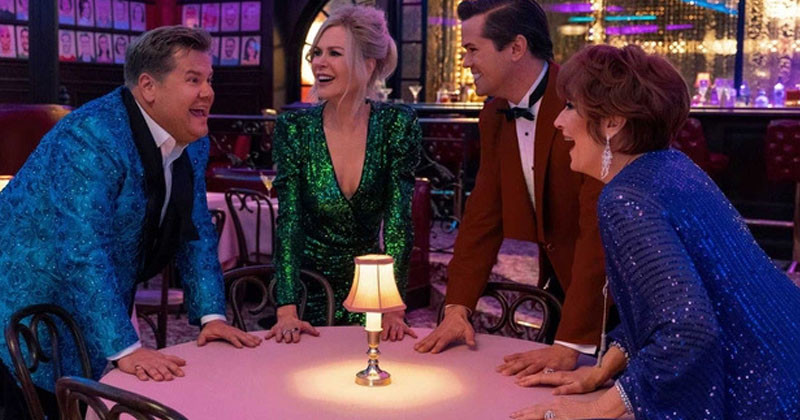 Having been heavily advertised since it was not aired, owning an A-list cast was startled, The Prom is the most anticipated movie in December on Netflix. The film brings a hearty music party with many beautiful performances. However, like many other blockbuster movies of the company, The Prom has a normal story with an extremely predictable ending.

Adapted from a musical of the same name, The Prom opens with a group of obsolete Broadway artists including Dee Dee Allen (Meryl Streep), Barry Glickman (James Corden), Trent Oliver (Andrew Rannells) and Angie Dickinson (Nicole). Kidman) is looking for a way to save his reputation. By chance, they know the story about Emma Nolan (Jo Ellen Pellman) - a lesbian girl who wants to lead her girlfriend to the year-end prom but is opposed by the school's parents' association. The "star" group immediately went from New York to Indiana with the aim of claiming the rights of Emma.

Although he did not write the script directly, Ryan Murphy still brings his personal style to The Prom. The film is about talented but out-of-date stars, some gay characters being bullied by classmates but still confident, a gentle teacher who loves musicals is ready to stand up for the interests of students, girls. Cheering is mean and sarcastic ... Overall, The Prom is like Glee with a bit of Hollywood with a strong tempo but not as "drama".

The message was good, but the knots were bland

Besides the "be yourself" message that has been preached by Hollywood over the past few decades, The Prom actually has some interesting stories. It's that celebrities use community activities as a way to polish their name. When the big group of stars came to Indiana, they did not really care about Emma Nolan or the LGBTQ + community, but only hoped that this action would attract the attention of the press. This helps their image become more beautiful, even winning the acting award next year because "every award ceremony is political".

Or that people who oppose the LGBTQ + community often rely on convincing arguments, such as they just want homosexuals to live normally, quietly, do not "let loose" cause offensive. Even the parents' association also used an excuse to protect Emma from allowing her to go to the prom with her schoolmates. However, is it unfair that "heterosexual" couples are allowed to freely express their affection in public, while Emma cannot hold the hand of her girlfriend she loves to come to the prom.

However, these problems are quickly resolved through a few lines or one or two songs. The audience did not even see the psychological transformation of some characters. Knowing that the high school musicals are hard to avoid some script loopholes, but The Prom still wasted potential by just "unleashing" a few stories but not getting to the point.

Of course, the main reason why many viewers are looking forward to The Prom is the cast, and the fact that the stars are doing so well in their roles. Meryl Streep as a narcissistic actress whose solo performance It's Not About Me is extremely popular. Along with that, the charming performance of Meryl Streep plus the soulful eyes make the character Dee Dee Allen more memorable.

But the person who deserves the most praise is starring Jo Ellen Pellman. No acting experience, Jo Ellen Pellman did not have joints when standing next to the seniors. Emma's interactions with every character are cute, from her girlfriend Alyssa Greene (Ariana DeBose) to her new confidant friend Angie Dickinson. Her strong, inspirational and powerful voice makes the songs in the movie, especially Unruly Heart, much better. In particular, Jo Ellen Pellman is also part of the LGBTQ + community, so it is very suitable for the role of Emma.

The music is easy to hear, catchy, although it lacks a little link

Produced by Glee's "father", it's not surprising that The Prom has good music and performance. Each character has their own song to express their story. The duet Dance With You between Pellman and Ariana DeBose is the romantic love story of Emma and Alyssa, also expressing the desire to live true to her true nature. Tonight Belongs To You is like a narrative story, beginning with hilarity, but ending with sadness. Love Thy Neighbor has an interesting and offbeat lyrics.

As for the performance, Changing Lives is like Broadway when the star of the movie strides on a street full of theaters. It's Time To Dance brings an atmosphere of excitement and excitement like High School Musical ever had. However, The Prom doesn't have a single genre of music and lacks overall harmony. This makes movies sometimes get messy and crammed.

Overall, The Prom is not too great but easy to watch, easy to feel, suitable for entertainment and even more attractive if you are a lover of musicals. The film is now available on Netflix.