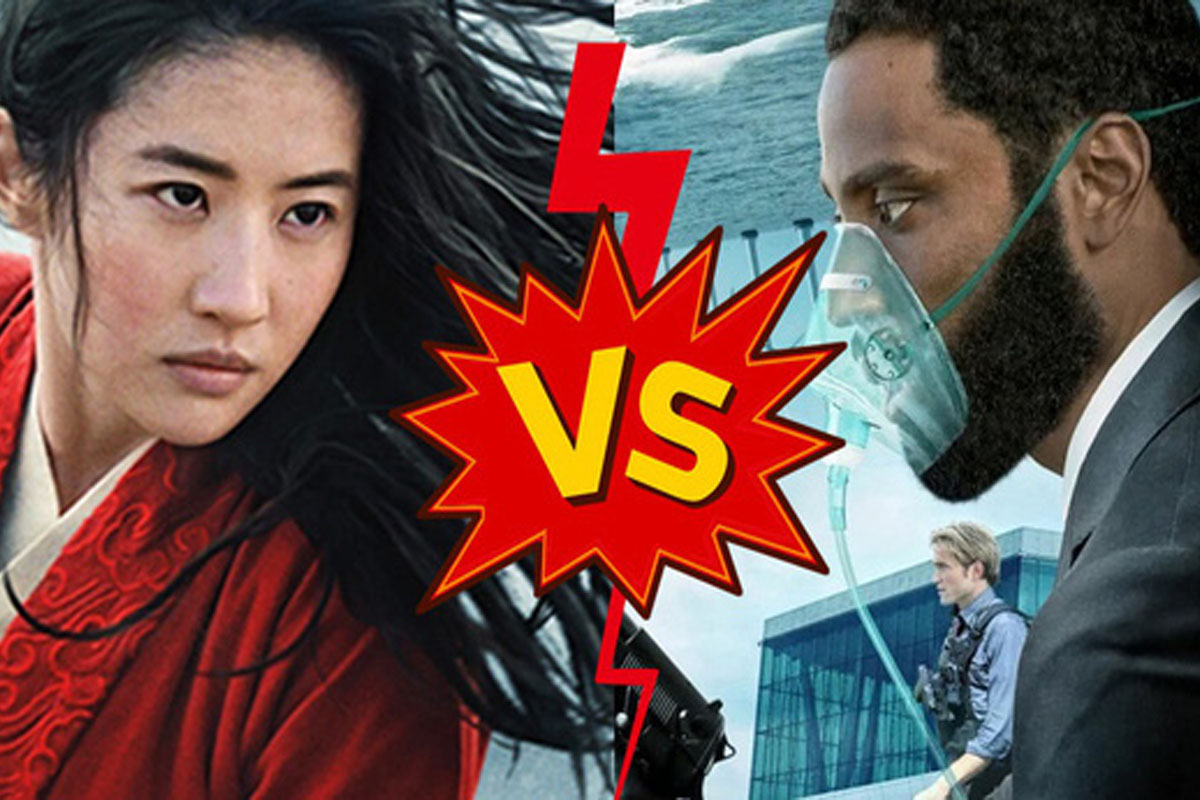 With Warner Bros and Disney decision in the release of Tenet and Mulan, it is very likely that world cinema will step i...

With Warner Bros and Disney decision in the release of Tenet and Mulan, it is very likely that world cinema will step into a whole new perspective.

Next September, the world cinema will see the return to the screen of blockbusters after months of "asylum" because of COVID-19. Specifically, viewers will be satisfied with a timeless super product called Tenet from director Christopher Nolan and legendary warrior Mulan of the Mouse House. Although they were released at the same time, the two movies were released in two different ways.

Contrary to the move to lie still and wait for the epidemic to pass, Warner Bros. decided to premiere Tenet worldwide from August 26 and the film will be shown in the US a week later, on September 3 - just one day ahead of Mulan. After many times rescheduling to avoid the epidemic, the decision to release the film at this time is a courageous move for Warner Bros. and have the ability to decide the fate of the next blockbuster waiting for the release time.

Known as a visionary and pioneering director in the field of cinema, Christopher Nolan was at the forefront of using IMAX cameras with The Dark Knight in 2008. Therefore, it is understandable that he is very serious. with maintaining the traditional movie-watching model on the big screen so that the audience can feel the movie in the most authentic way. If Tenet is still reaping box office success during the season, Warner Bros. It is totally okay to continue the plan to release two other blockbusters of the year, Wonder Woman 1984 and Dune.

This Warner Bros. plan is supported not only by large and small theaters around the world but also by movie fans. After months of absence from blockbusters, everyone is ready for an entertainment experience in the theater with a big screen and vivid sound.

Contrary to Warner Bros., Disney revealed a new plan that nobody expected: bringing Mulan "back" and released on Disney + in some countries from September 4. The price to enjoy Mulan on Disney + was revealed at $ 30 - a number that makes many people bored. Thirty dollars is considered a pretty high price for those who want to see Mulan alone. However, considering that Mulan is a family movie, this amount is actually quite cheap for a family of 3 or more members to enjoy a blockbuster movie together. In return, the quality of the movie will depend heavily on the viewers' home equipment.

In the midst of complicated developments in the COVID-19 epidemic in many European countries, this action by Disney is considered reasonable, both protecting the audience's safety and "salvaging" a little revenue. for the company by 2020, which is already too sluggish. Of course, in countries with open theaters and no Disney +, Mulan is still released in the traditional way.

With the move to put Mulan on television online, Disney CEO Bob Chapek still claims that this movie is just an isolated case, viewers should not expect the same thing to happen with other Disney movies. However, a source from the Disney + site of Verge said: "We have invested in this so much that Mulan won't be the only one." If this is true and Mulan reap the success at Disney +, the film will mark a new turning point for the film industry.

Another factor that makes Disney's decision even more wise is the profit problem. Remember many years ago, in Vietnam, there was a stir with tears of Ngo Thanh Van when he could not come to a revenue sharing agreement with CGV. This is happening again with Mulan. Instead of sharing a decent portion of the revenue with theaters, Disney now keeps 100% of the proceeds from Mulan. So, even though the movie will bring in less money, Disney is still more likely to benefit from the release of Mulan in theaters. The next Disney movies this year including Black Widow or The New Mutants are also out of possibilities of being pulled back to Disney +.

This, of course, doesn't make cinema systems happy - especially if they're half-baked because there aren't any movies to show. Recently, the online community also stirred with the image of a movie theater in France shattered Mulan's poster because of frustration that it could not be shown. But does this interest Disney? Is there a movie theater that dares to "boycott", "hate" the next Disney blockbuster in theaters, or still have to rely on it to earn co-profits?

As such, both Warner Bros. and Disney are both making decisive choices in an age of plague that has turned our economy around. One side is traditional cinema we are too familiar with but too fragile and easy to be affected - the other side represents the development of technology and user habits, with high convenience. How will the confrontation between the two big guys, the two most anticipated blockbuster of the year at the same time end when each one goes in one direction, and each side has their own reason? The future of the film industry now depends heavily on the end of this war.