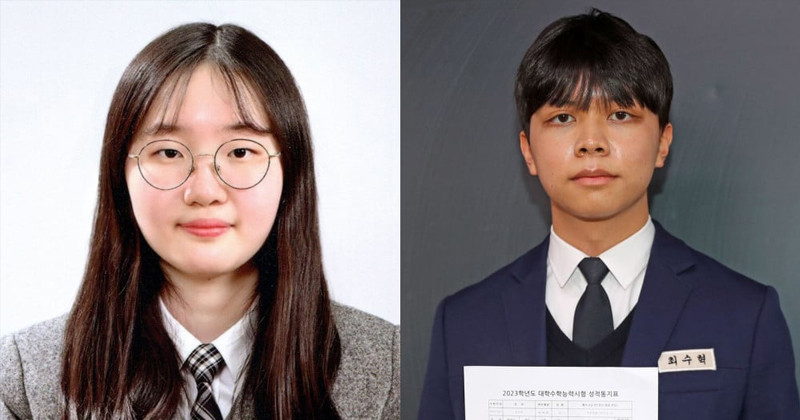 The criteria for a perfect score are to get all the questions correct in the Korean language, mathematics, and research areas and to receive a grade of 1 in English and Korean history, which are absolute evaluations. According to the Korea Institute of Curriculum and Evaluation, there are two students and one repeat student who received perfect scores. All three have applied to medical schools.

Pohang Jecheol High School's Choi Soo Hyeok (age 18) was asked in a recent News1 interview, “Doing well is because of a natural gift or because of working hard?” and he answered “naturally gifted.” Choi Soo Hyeok said, “Honestly, I think I can do this because I am smart. I think I studied a lot more than others, and I can solve questions well (because I am smart), so I was able to consistently study. My father studied a lot, so I believe there is an influence of heredity at play."

Choi Soo Hyeok was born in the United States, but early in his childhood, he moved to Pohang. His father is a professor at the Pohang University of Technology and his older sister is an electrical engineering major at Seoul National University. Choi Soo Hyeok said, “I didn't have a subject in school that I particularly enjoyed. I was good at math, so I invested more time in it than in other subjects, even though I didn't like it." On the other hand, the second student who received a perfect score - Kwon Ha Eun (age 18), a senior at Hyundai Chungwoon High School - explained that it was her hard work that allowed her to get a perfect score.

She explained, "I focused on solving one question after another." Kwon Ha Eun spent her high school life in a school dormitory and did not receive private tutoring or attend academies. She explained that she would ask the teachers at school about questions she didn't know how to solve or would learn the solution through online lectures. She explained, "I solved a lot of questions through workbooks. I repetitively solved difficult questions I got wrong over and over again in regard to Korean language subject, and I solve a lot of new types of questions in the science topics." Kwon Ha Eun shared that she tried not to panic on the day of the exam. Kwon Eun Ha explained that she made a conscious effort to remain composed when she encountered a question she couldn't solve after three attempts and stayed calm until she was finally able to find the answer.

She also shared that she wants to become a doctor and elaborated, "I was frequently hospitalized when I was young, so I wanted to become someone who can help others." Currently, Kwon Ha Eun has applied to Seoul National University, Yonsei University, and Sungkyunkwan University medical schools.