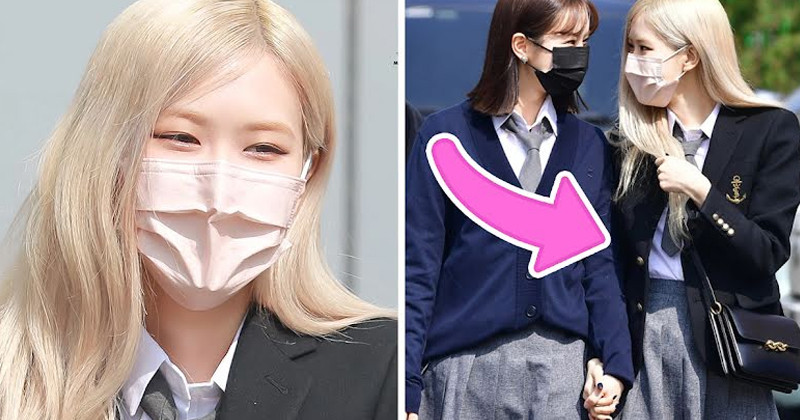 If Rosé wasn’t already on your “People to Rob” list, she will be now.

Most students agree that there’s nothing chic about wearing a school uniform—unless you’re BLACKPINK‘s Rosé, of course. Not only did Rosé look totally stylish in the uniform she wore to a Knowing Bros recording, the outfit was also more expensive than most people’s college tuition.

Rosé appeared on Knowing Bros alongside her close friend, Girl’s Day‘s Hyeri, to promote her solo debut, “On the Ground”. Set in a mock high school classroom, the show is known for making all guests wear school uniforms and assume the role of transfer students. But while female stars always look gorgeous on the show, few wear outfits as expensive as Rosé’s was.

When the star soloist showed up at JTBC‘s studios to record her episode, she wore a wool felt embroidered monogram anchor jacket from Yves Saint Laurent—the brand she endorses as a global ambassador. Rosé’s jacket alone was worth ₩4.18 million KRW (about $3,210 USD).

Pairing the jacket with a grey school skirt, she accessorized with a Yves Saint Laurent Le Mallion satchel bag in smooth leather, which retails for ₩3.85 million KRW (about $2,975 USD).

But the most expensive part of her outfit was actually the most inconspicuous. On her hand, Rosé wore an Atlas X closed wide ring gifted to her by Tiffany & Co. Despite its tiny size, the ring costs a staggering ₩6.00 million KRW (about $4,610 USD).

Altogether, Rosé’s school uniform outfit cost more than most people pay to go to school. The total price (skirt and socks not included) is ₩14.2 million KRW (about $10,900 USD). That’s more than two years of university tuition in South Korea at the average rate, and even more than the average yearly in-state tuition fee for public colleges in the United States (approximately $10,000 USD)!