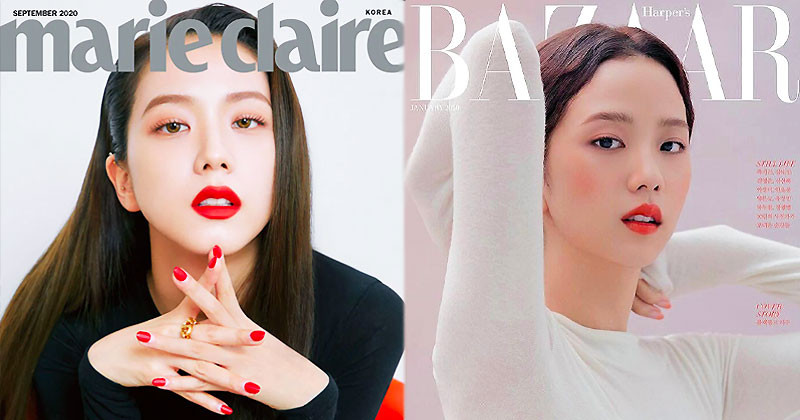 Jisoo who is the lead vocalist of the popular Korean band BLACKPINK has graced the covers of 5 popular fashion magazines. Scroll to see her looks on the same.

Korean pop stars have gained massive popularity across the world because of their music. One such girl band is BLACKPINK which is one of the most popular Korean pop bands. Jisoo, who is the visual and lead vocalist of the girl group, is widely loved by the fans. Apart from her voice and music, she is also known for her innate fashion sense. And now, she is the cover girl of Korea's five best fashion magazines.

BLACKPINK's Jisoo has graced the covers of some of the most popular fashion magazines like Vogues, Elle, Harper's Bazaar and Marie Clair. Her style statement soft yet elegant and classy. Her outfits often include comfortable loose jeans, skirts and mismatched tops. Scroll ahead to see her outfits for the photoshoots of those magazines.

Jisoo's most recent photoshoot was for the cover of W Korea magazine. In the pictures, she is emanating a queen's vibes. For one of the pictures, she has worn a white high-neck top and floral earrings. She has left her hair open and styles them wavy with a few strange of hair falling out.

Her fans cannot stop gushing about her looks on this cover. Several of her fans are appreciating her look in the curly hair and are calling her gorgeous. See their reactions here:

For Elle's cover, Jisoo is seen wearing a brown one-shoulder studded dress. Here, too, she has left her hair open to add a touch of innocence to the look. She has accessorized her look with a watch and a bracelet. Jisoo is wearing delicate and small earrings to keep the look simple yet stand out.

For this Marie Claire's magazine's cover, Jisoo has styled her look like a boss. Wearing a classic combination of red and black, Jisoo looks stunning in the picture. She is seen wearing a black full-sleeved dress and has painted her nails and lips in a dark shade of red. She has accessorized her look with just a ring.

For this cover of Vogue magazine, Jisoo is dressed like a princess. Wearing a black frilled gown, Jisoo is sitting on the floor playing around with her hands. She has kept her look very simple and accessorised it with only a ring.

For the cover of Harper Bazaar, Jisoo is seen wearing a white full-sleeved top. She has worn light makeup and highlighted her lips in an orange tint. She has not worn any jewelry and has chosen to keep it simple.