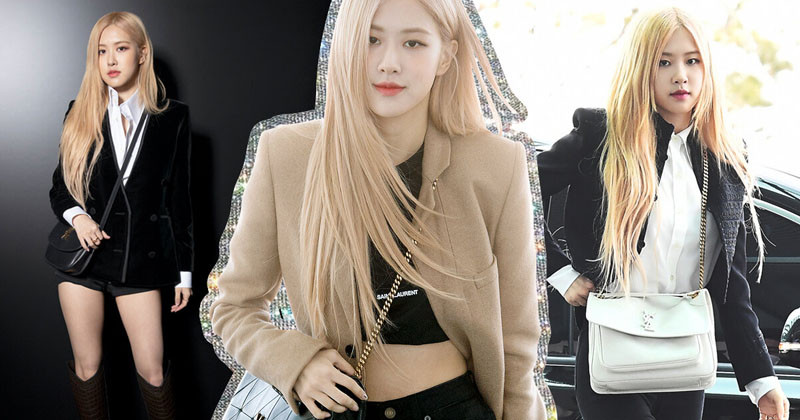 All this in less than 2 months!

If you ever have any doubts that BLACKPINK‘s Rosé is a true “It Girl”, you only need to look at how she accidentally sells out almost everything she touches. Just take a look at these 5+ fashion picks that have sold out in 2021 alone.

Rosé wore this Elvis Presley print t-shirt from R13 on Instagram on February 11. Charming Rosé, one of the star’s Chinese fanbases, gifted it to her as part of her 2021 birthday project. The $233 USD t-shirt was sold out by February 12.

This Saint Laurent oversize structured feather jacket was one of Rosé’s standout fashion pieces at THE SHOW online concert on January 31. The jacket, which was worth $15,000 USD, sold out by February 4.

Rosé also wore these polar obsidian combat boots from Current Mood at THE SHOW on January 31, along with a glitzy silver dress from The Blonds. The shoes, which had been discounted from their original retail price of $115 USD, sold out by February 3.

Like most idols, Rosé updated her Instagram feed with snow pics as soon as the weather in South Korea chilled down. She was seen wearing this $1,500 USD Rick Owens FW20 down jacket on January 6, and it sold out the very next day. The Saint Laurent classic sac de jour bag she wore with it, worth $2,250 USD, was also sold out.

Rosé is so popular, even her new pooch Hank is an “It Dog”. The $345 Louis Vuitton Baxter collar he was seen wearing on her Instagram story was sold out on January 31.

#AllOurLoveROSÉDay: Here are Some Little-Known Facts about BLACKPINK Rosé

(Thursday, Feb. 11, 2021), was BLACKPINK member Rosé's 24th (25th in South Korea) birthday! To celebrate the idol's birthday, we have compiled some facts you may or may not have known about the New Zealand-Korean singer. Happy birthday, Rosé!

In the past, Rosé revealed that her ideal type is someone who is nice and genuine, as also has a good voice. Additionally, she also confessed that she prefers cute guys over sexy guys. The closest person to her ideal type, according to Rosé herself, is South Korean actor Gong Yoo.

In her bucket list in 2014, Rosé revealed that she wants her first love to be fun, saying, "I want to remember it as my youth." We hope you find the love you deserve, Rosé!

Rosé's musical role model is South Korean singer Gummy. In the past Gummy has praised Rosé's vocal color, saying, "Rosé's voice is so unique. It is the type of voice young people would love."

She also considers South Korean soloist IU as one of her role models. To Rosé's possible delight, IU has stated in an interview back in 2017 that one of the singers she wants to collaborate with is BLACKPINK's Rosé!

Outside of K-pop stars, Rosé has also named American singer Tori Kelly as one of her musical inspirations.

Despite her badass stage presence and unique charisma when she performs, Rosé is actually a total softie! During an episode of "BLACKPINK House," Rosé was seen video calling her mom. During the call, Rosé's mom revealed that her pet fish back in Australia passed away. This caused Rosé to shed tears, wondering how the fish had passed away as it did not look sick. Member Jisoo has also stated that whenever Rosé eats a good meal, she ends up shedding tears! Protect this baby at all costs!

Other than the members of BLACKPINK, Rosé boasts popular and famous besties in the K-pop industry. It is a known fact that she is best friends with Ladies' Code member Ashley and Girl's Day member Hyeri. She is also besties with Red Velvet's Yeri, Joy, and Seulgi, as well as TWICE member Chaeyoung and Tzuyu.

She is also friends with other international talents, such as Halsey, Dua Lipa, Ariana Grande, Billie Eilish, Jayden Smith, and more!

5. Her Favorite and Least Favorite Foods

Rosé's absolute favorite foods are mangoes and kimchi stew. Her favorite cuisines are Thai, Western, and Vietnamese food, and she has stated in the past that she prefers these three cuisines over Korean food. Rosé is also fond of tea.

While she isn't that picky of an eater, she revealed that she hates jokbal, or pig trotters. She also does not like avocados due to their texture, which she described as mushy and weird. She is also not fond of ice chocolate drinks.

BLACKPINK‘s Rosé has it all! She’s proven many times that she has what it takes to be one of the greatest K-Pop idols ever. From singing to acting, she knows what she’s doing. Check out some reasons why she’s basically the perfect K-Pop idol below!

First up, Rosé is best known for being the main vocalist of BLACKPINK. She has a unique vocal color that makes her stand out from the crowd.

She’s always consistent no matter how tiring the accompanying dance is or how long she’s been singing.

It isn’t common to find an idol who’s almost as good at dancing as they are in singing. BLACKPINK’s Rosé, however, is one of those people.

She’s second to just Lisa, and her straight dance lines and powerful moves are proof why.

Next up, Rosé is also capable of acting! As soon as fans watched the music video of “Lovesick Girls”, they wanted her to be cast in a drama.

She’s best at acting sorrowful and listless in a completely natural way.

We can’t talk about Rosé without mentioning her visuals! Her looks have made her go viral numerous times, from having a tiny waist to being an all-natural beauty.

Luxury fashion brands have noticed her prowess in fashion, with Saint Laurent choosing her as their global ambassador.

Fun fact: even her dog, Hank, received numerous freebies from the luxury brand!

As a member of BLACKPINK, she’s broken records with every single release. From being one of the only girl groups to top MelOn‘s daily chart to having some of the most YouTube views in the world, she’s done it all.

Even her solo activities do incredibly well! Her debut teaser received over 13 million views within 24 hours and over 36 million views at present.

6. She’s in love with music

Last but certainly not the least, Rosé is the perfect idol because she loves her job.

Music is her life, and it’s been her passion since she was a child. It’s the best thing she turns to when she’s having a hard time.

I have a lot of thoughts running through my head, and singing is kind of like stress relief. And everything just kinds of makes sense when I’m doing this.