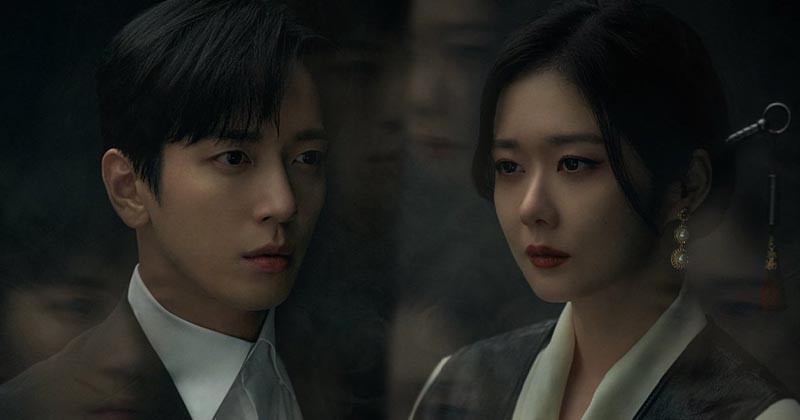 KBS 2TV's new Wednesday-Thursday drama 'Sell Your Haunted House', which is set to premiere on April 14, is a life-friendly exorcism drama in which an exorcist teams up with another exorcist specializing to fight evil spirits and release houses from evil spirits.

Above all, Jang Na Ra is expected to transform from a cheerful image to a cold-filled appearance as Hong Ji Ah, president of Daebak Real Estate and an exorcist, and Jung Yong Hwa (CNBLUE Yonghwa) is expected to show a different passionate performance by transforming from a slick exorcist to a chosen Young Mae.

In this regard, Jang Na Ra and Jung Yong Hwa, the main characters of 'Sell Your Haunted House', are drawing attention by presenting "Character Posters," which provided the highest level of mystery. The two types of "character posters," which close-up the faces of Hong Ji Ah (Jang Na Ra) and Oh In Beom (Jung Yong Hwa), are completed with more distinctive posters, each adding to the effect of smoke spouting out next to the two. The acting, which looks like a scattered shadow and a piece of loneliness, is amplifying the question of whether it implies another face hidden in her and him.

In particular, Hong Ji Ah, who wears a raincoat on her exorcism, shows off her sharp posture in a Black & White. Oh In Beom also doubles his intensity by a determined look, matching his outfit with neat black and white. Hong Ji Ah and Oh In Beom are a fascinating exorcism duo with unique energy to pierce through the powerful darkness, and attention is being paid to the real story behind their confidence and relaxation.

Jang Na Ra and Jung Yong Hwa drew admiration and applause at the scene of the charismatic Hong Ji Ah and Oh In Beom's character poster. Usually, the two people with easygoing personalities were shy of a serious and sharp concept, but when the camera turned, they immersed themselves in the character and put their cool facial expressions in each cut to portray the successful one-shot one-kill scenes.