Ariana Grande announced that she will release an album in October, will rumors of her cooperation with BTS come true? 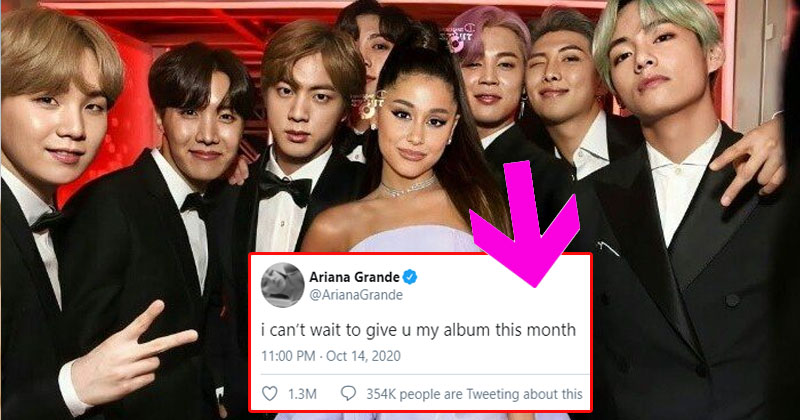 Ariana Grande Has Just Officially Announced That She Will Release A Brand New Album This October. Immediately, Fans Wer...

Ariana Grande Has Just Officially Announced That She Will Release A Brand New Album This October. Immediately, Fans Were Extremely Excited, Thinking That The Album Would Include A Collaboration Song With BTS.

Recently, Ariana Grande has just released an information that excited fans, that she will release a new album this month. It can be said that Ariana is always the name that receives the most expectations from audiences around the globe every time she comes back.

i can’t wait to give u my album this month

Previously, information about the 6th studio album of Ariana’s career was rumored by many fans and spread on the social network. There were even rumors about a combination product between Ariana Grande and BTS.

Specifically, on the lyrics.lol site, the largest lyrics database in the world, suddenly appeared a brand new song called Not Us. It is worth noting that the song Not Us was in the profiles of both Ariana Grande and BTS.

However, many viewers were not too excited about this rumor because they did not see any signs of Ariana’s new album. Therefore, the comeback in October confirmed by herself makes fans look forward to the collaboration with BTS more than ever. Perhaps, the combination of BTS and Ariana Grande is not too surprising because they were extremely close at the 2020 Grammy rehearsal, they also often express their love for each other. In addition, when being interviewed at Grammy 2020, BTS also expressed their wish to combine with Ariana Grande in a music product.

At present, the status line that announced the comeback of the “thank u, next” singer is still a hot topic for MXH. This October comeback will surely mark the next successful step in Ariana’s career because in 2020, dispite of only collaborating with other artists, Ariana has owned not only 1 but 2 songs that hit the top on the Billboard Hot 100 chart, setting an unprecedented series of records. Those achivements show that, as long as Ariana appears, her song becoming hit is a piece of cake.

However, in this product, it requires Ariana to have a completely new transformation that can help her overcome the huge shadow of the previous two albums, ‘Sweetener’ and ‘Thank u, next’. Because those two albums marked a great success in Ariana’s career, that not only reached the top 1 on many charts, won many prestigious awards, but also helped the female singer to be more appreciated by professionals. While ‘Sweetener’ helped Ariana own the first Grammy trophy in her career, the album ‘Thank u, next’ also became a hit on the Billboard Hot 100 chart with 3 singles entering the top 3 respectively.