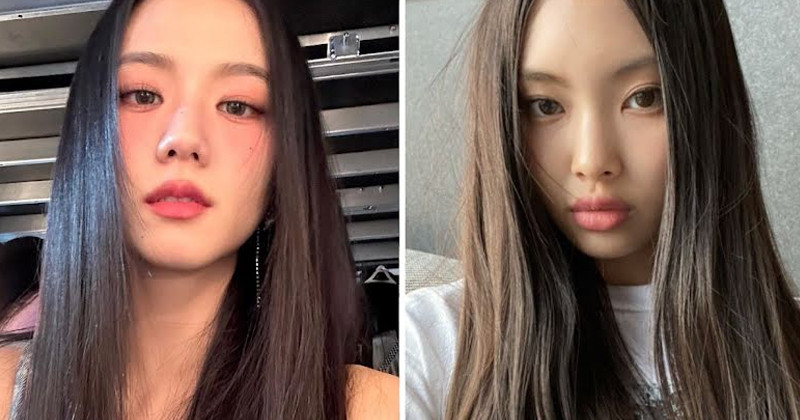 The two idols were twinning in the same popular brand.

BLACKPINK is currently on the European leg of their 45-show BORN PINK world tour, and their most recent stop was the beautiful city of Barcelona, Spain. The group performed in front of a sold-out crowd at the Palau Sant Jordi, which has a maximum seating capacity of 17,960.

Before changing into their glamorous stage outfits for the show, the members first greet lucky VIP fans in more casual yet equally chic outfits during their soundcheck.

For BLACKPINK’s Barcelona soundcheck, the group looked trendy yet comfortable as they chatted with fans before the show.

BLACKPINK’s oldest member Jisoo switched up her appearance with a pair of trendy oversized eyeglass frames. She wore Diesel’s $375 USD printed wool jumper in gray for her shirt and paired it with baggy khaki pants for the ultimate laid-back yet stylish look.

Her youthful visuals shined in the casual day-to-day outfit.

NewJeans’ Hyein also recently wore the Diesel top, but styled it in a different way.

Diesel has steadily become a prominent brand worn by K-Pop idols, and Hyein was honored to attend the brand’s pop-up event in Korea in September.

The young idol gained attention for her classy and mature styling at the event, earning praise for her model-like proportions.

That same month, she again showed love for Diesel with her airport fashion.

NewJeans made their airport fashion debut on September 30 as they left Incheon Airport for KCON 2022 Saudi Arabia.

Each member wore a designer brand, and maknae Hyein was dressed head to toe in Diesel. She wore the same Diesel printed wool jumper with the logo in red and paired it with Diesel straight-leg jeans and high heels.

Compared to Jisoo’s styling, Hyein’s outfit dressed up the look a bit more with the inclusion of high heels and a handbag.

Both idols looked incredible in their outfits and completely owned their looks.