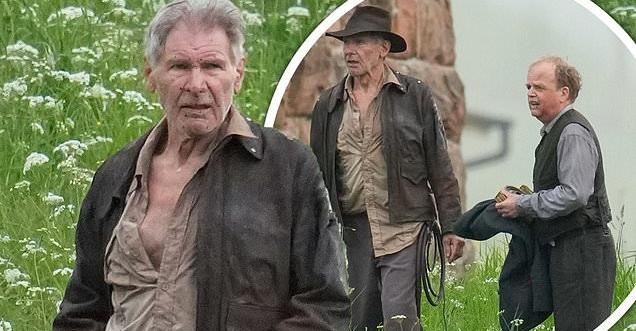 He's been seen settling into UK life since arriving to film Indiana Jones 5.

And Harrison Ford looked ready for action on Friday as filming continued for the highly-anticipated movie in Leaderfoot, Melrose in the Scottish Borders, where he was looking bruised and battered.

The Hollywood star, 78, was joined by fellow thespian Toby Jones, 54, as they shot tense-looking scenes in the idyllic location while he was seen to sport the iconic costume. 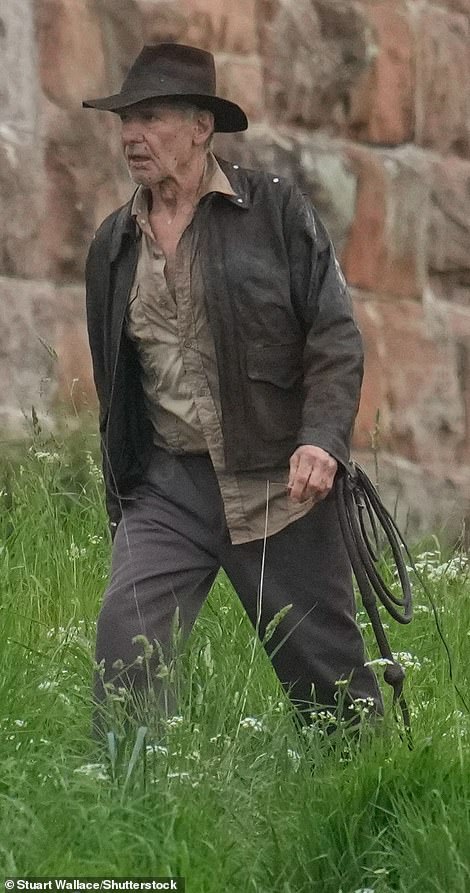 Back at it: Harrison Ford looked ready for action on Friday as filming continued for the highly anticipated movie in Leaderfoot, Melrose in the Scottish Borders

Both actors cut a stern figure as stood amid tall grass while filming the new scenes, with Toby sporting bruised make-up and appearing in anguish as he got to work alongside the Hollywood heavyweight.

At one point, Harrison gave a thumbs up, clearly happy with the work so far having sparked feverish excitement among fans at the prospect of the latest installment in the beloved series. 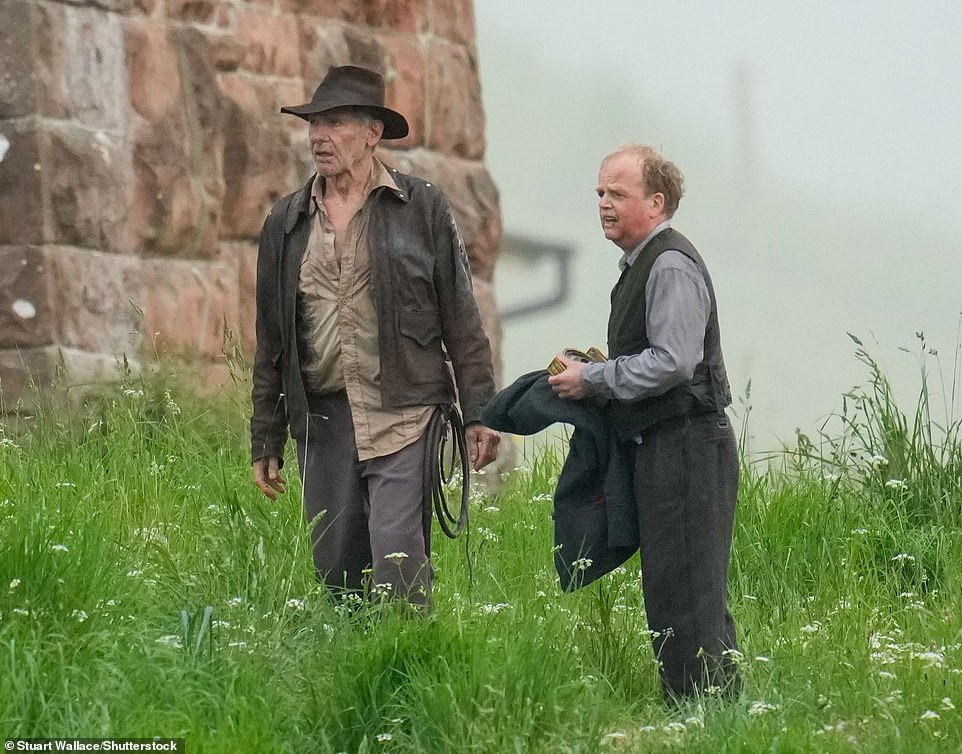 Filming: The Hollywood star, 78, was joined by fellow thespian Toby Jones, 54, as they shot tense-looking scenes in the idyllic location with both stars sporting dishevelled looks 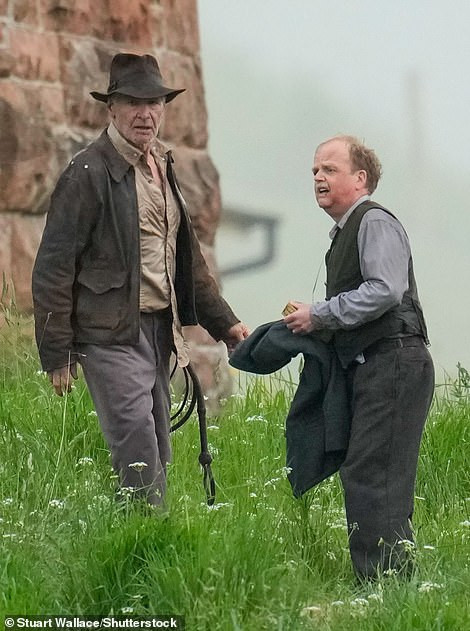 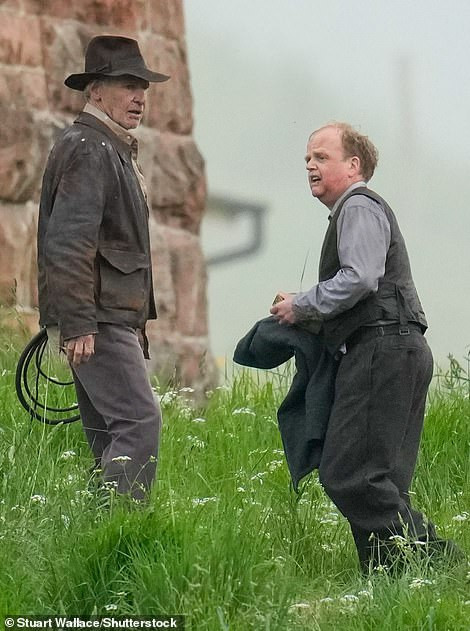 Familiar look: He also rocked an open tan shirt and brown joggers, while Indiana's famous whip hung from his hip

In between scenes, crew donning face masks were seen milling around the actors. While Harrison was also seen handing a cleaning wipe he had found in the grass to a member of staff.

It comes after production got underway over the weekend on the North Yorkshire Moors, as the action began in the dead of night. A stuntman was seen, surrounded by a film crew and hefty equipment, preparing to undertake an action-packed motorcycle sequence.

Though very dark and misty, the stuntman appeared to be brandishing a face mask resembling Harrison, who plays the titular lead role.

All good: At one point, Harrison gave a thumbs up, clearly happy with the work so far

The scene was shot in the early hours in Pickering - but the stunt went a little awry when the motorcyclist came tumbling off. The head-mask flew off in the incident, with one of the crew having to retrieve it.

The on-set first aid team was called over to check out the stunt rider. While it appeared he was unharmed, filming was paused due to damage caused to the bike.

According to a witness, one of the crew was heard saying that the production is already a day behind schedule, following a lengthy hold up thanks to the COVID-19 pandemic.

This will be Harrison's fifth time reprising the title role of the heroic archaeologist with supporting parts going to Mads Mikkelsen, 55, and Phoebe Waller-Bridge, 35. On set: Harrison and Toby looked much for relaxed in between scenes

A stretch of the North Yorkshire Moors railway has been transformed for the film too.

Crew members of the 2022 blockbuster could be seen on Friday working near a steam train which had been transformed into a Nazi carrier engine.

Filming will begin on the same stretch of track used only a few weeks ago by Tom Cruise for Mission: Impossible 7.

A glimpse at the props being set-up showed a black steam train which had been transformed into a Nazi carrier engine and vintage cars. 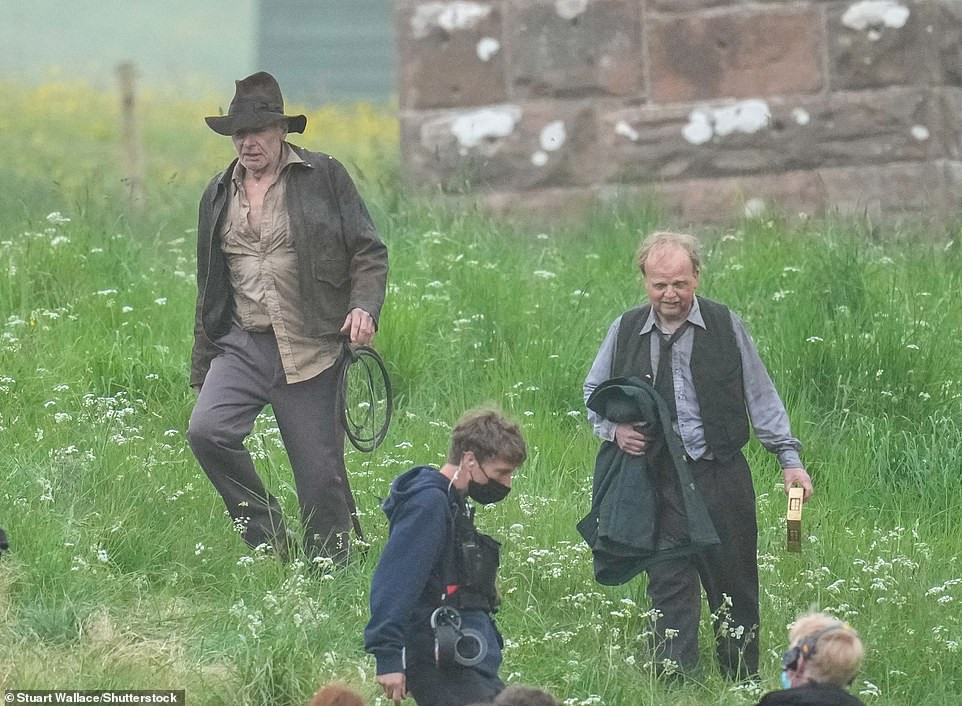 Time for a break: They were seen making their way down the hillside after shooting the tense-looking scene Production crew: In between scenes, crew donning face masks were seen milling around the actors 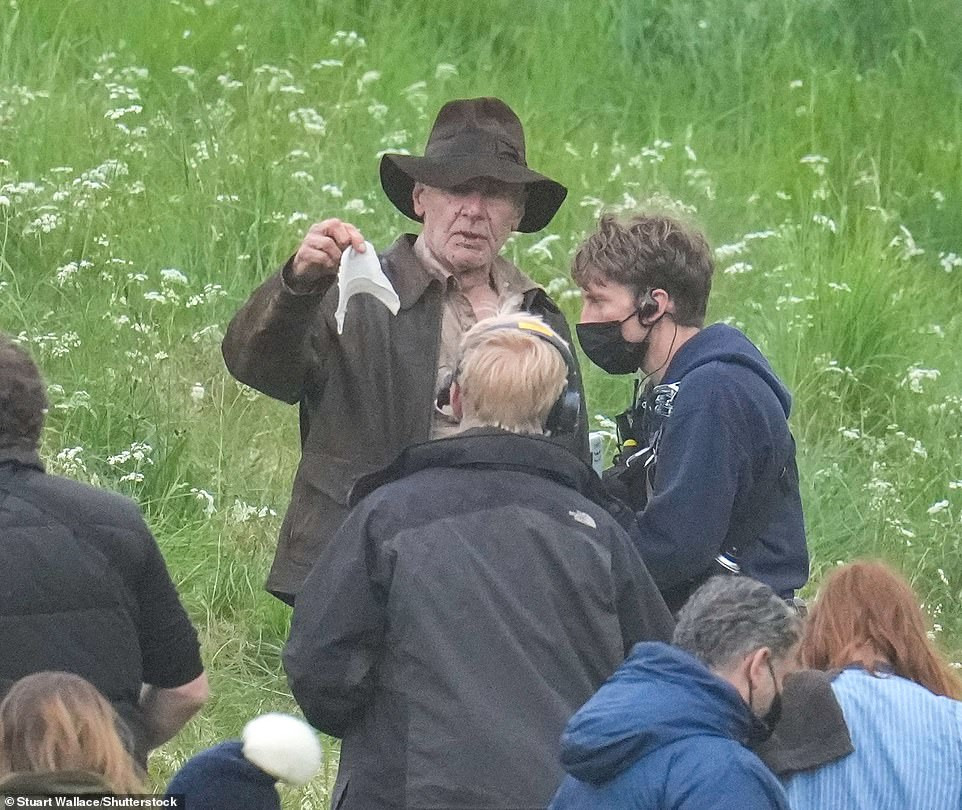 Look what I found: Harrison was also seen handing a cleaning wipe he had found in the grass to a member of staff

A swastika insignia had been attached to the side of the steam engine, as well as onto a wooden pallet and onto the side of a green passenger carriage.

A number of props were also being positioned by crew members onto open-topped carriages to give the impression that the steam engine was transporting goods for the Nazis in the film. Additionally, a number of vintage vehicles were also spotted parked on a field nearby.

A troop-carrying truck, as featured in a number of the other Indiana Jones films was one of the vehicles parked near the train tracks, with crews working to put on the canvas roofing.

Additionally, a vintage motorcycle featuring a sidecar was also among the vehicles - a similar bike featured in the third Indiana Jones instalment. Historic: Bamburgh Castle, where filming is taking place, is said to be haunted by a ghost

James Mangold is directing the movie in place of Steven Spielberg, and Phoebe Waller-Bridge and Thomas Kretschmann are also on board to star.

Plot details are still being kept under wraps, and it's unclear what roles the new additions will play in the fifth film.

Legendary composer John Williams is also set to return, continuing a musical legacy that began 40 years ago with Raiders of the Lost Ark.

Meanwhile, Harrison previously said he wouldn't make another Indiana Jones movie unless he was sure the production team could 'kill it.' 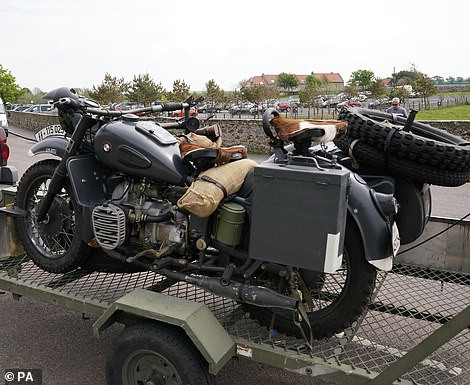 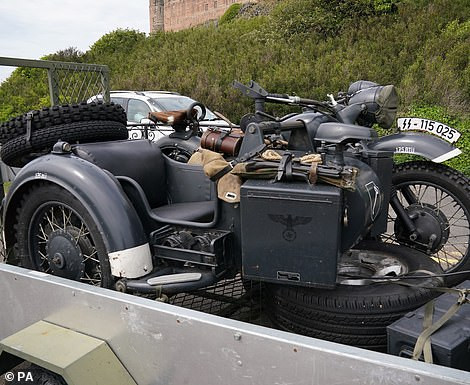 On your bike! Vintage motorcycles were taken to the location for what are presumed to be for flashback scenes

'The Marvel movies are a spectacular example of a success that worked the other way round - they killed it. We're not going to make another Indiana Jones unless we're in a position to kill it. We want it to be the best.'

The Logan star and the 31-year-old actress will both star in the fifth instalment of the iconic action franchise. 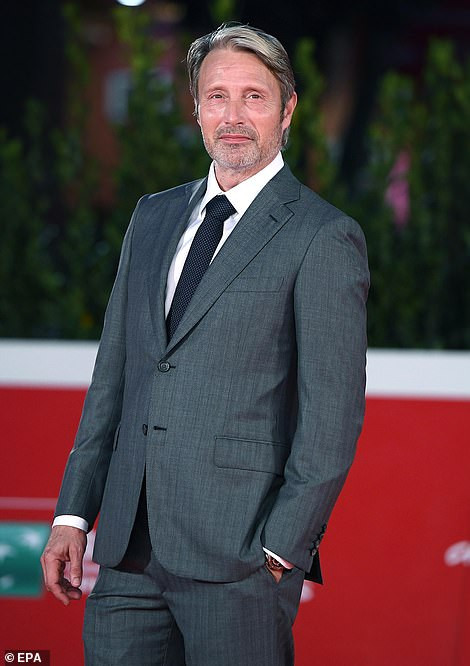 Supporting roles: Both Mads Mikkelsen, 55, and Phoebe Waller-Bridge, 35, L-R have also signed on to appear in Indiana Jones 5 alongside Harrison

Indiana Jones 5 was first announced in 2016 and originally scheduled to be released in July 2019.

It was then pushed back a year, before being delayed for another 12 months until July 2021 after Jonathan Kasdan - whose father Lawrence Kasdan wrote 1981's Raiders of the Lost Ark - was brought on board to work on the script after original screenwriter David Koepp departed the project.

The most recent film in the series was 2008's Indiana Jones and the Kingdom of the Crystal Skull, which earned over $790.6 million at the global box office. 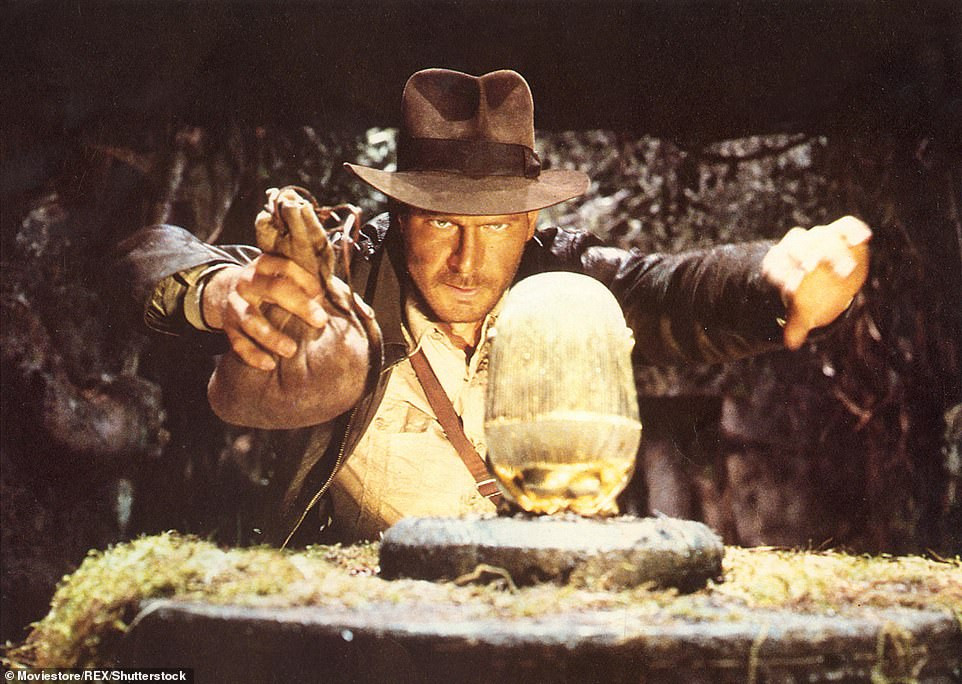 40 years later: Harrison has played the iconic role of Indiana Jones for 40 years, having first starred in Raiders of the Lost Ark in 1981