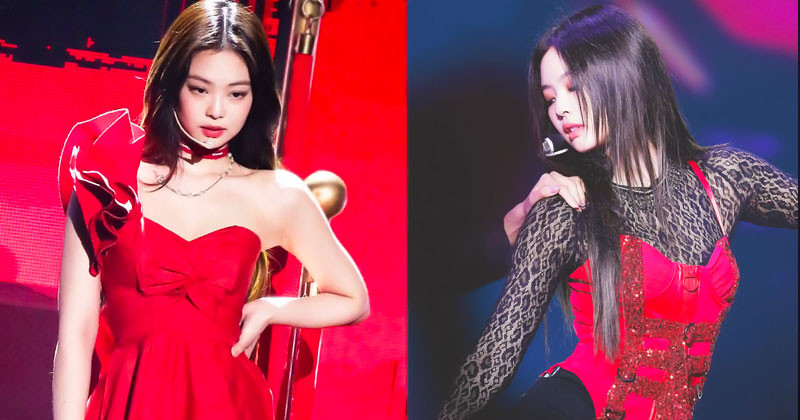 Jennie once said she doesn't do red, but she and red make a perfect combo that no one could take eyes off.

Jennie (BLACKPINK) has always been mentioned as a fashion icon of the current Kpop because of the ability to luxury all types of costumes. That is not only thanks to her high-quality visual and figure but mostly because of her attractive and sexy fashion style. Especially with that charming charisma, every time Jennie wears red, her breathtaking attractiveness is even more explosive.

Therefore, in the hearts of netizens, Jennie is the "red queen" of Kpop. Let's take a look at the times Jennie "burned" the stage with outstanding and sexy red outfits.

At the nearest stage, "THE SHOW" concert, Jennie had a very "burning" performance with a new shape and a red strapless shirt to create a giant rose. This item is combined with flower gloves of D&G and high-necked boots, in fact, the overall look is quite discrete and inconsistent. But with the ability to balance all types of weird clothes of Jennie, this outfit is still beautiful and sexy when she wore.

Also in The Show concert, Jennie continued to "flare-up" the stage when wearing a red dress that cut off the chest from the Blonds fashion house. Although this design has to receive a lot of criticism for being too cumbersome and cheesy, it must be recognized that Jennie is still too seductive, sexy and attractive in this dress. This is not "a beauty for silk" anymore but "beautiful silk for the sake of people".

This asymmetrical red dress of the Johanna Ortiz brand is one of Jennie's extremely famous legendary stage outfits, contributing to the title "Jennie Red" for her. The outstanding red dress is mixed with black thigh-high boots by the female idol, creating a sexy, strong and powerful look for the BLACKPINK rapper.

Referring to Jennie and the red dress, it is impossible to ignore the simple and super elegant bodycon dress that the female idol wore on her first solo promotion stage. Some expensive accented accessories such as pearl necklace and chiffon gloves made Jennie's proud and seductive beauty even more shine.

The sexy and prominent red corset shirt with the leopard print top. If you "tell" another idol to set this outfit, it will be easy to become cheesy and outdated. But with the "weight" of all Jennie's outfits, everything is still the "top of the top".

Simply a peplum-shaped two-wire shirt mixed with short black shorts, but with a seductive and outstanding red color, Jennie still successfully captured all eyes while standing on stage. She tied her hair with a bow with red tones, making her look more youthful and cute next to a sexy "burning eyes".

The red lace dress looks "ugly" and so cheesy, but Jennie still looks luxurious and sexy. In particular, the design of the dress also helps Jennie to fulfill all her physical advantages, especially her full bust and famous 90-degree shoulders.

Will Melt Your Heart

What would you say if you scored an online fansign with your idol? While many of us would freeze up and go blank in their presence, some fans have actually been brave enough to confess their feelings to K-Pop stars over video calls. Just take this fan of BLACKPINK Jennie, for example.

In celebration of their 2021 Season’s Greetings package, BLACKPINK recently held an online video call fansign with just 10 lucky fans—including a Chinese fan by the name of 76-BLINK on Weibo.

The fan’s conversation with Jennie started out simple enough. 76-BLINK asked, “Unnie, what are you doing?”, to which Jennie replied, “I’m calling you!“.

But then, things took a turn for the romantic. Changing her line of questioning, the BLINK asked, “Oh, do you have girlfriend?“.

Naturally, Jennie’s answer was “No, I don’t…“—and that’s when 76-BLINK went in for the confession. Claiming Jennie as her girlfriend, the fan replied, “Nice! Then you are mine!“.

While idols receive love confessions from fans of the opposite gender all the time, receiving them from fans of the same gender is often less common. Given the challenges surrounding same-sex relationships in South Korea, many fans may have expected 76-BLINK‘s conversation with Jennie to take a turn for the awkward. However, that’s far from what really happened…

At first, Jennie seemed shocked, questioning the fan—”What did you say?!“. But 76-BLINK brazenly carried on trying to strike up a date with Jennie, repeating, “I said, ‘Then you are my girlfriend!'”.

That’s when Jennie gave a honey-voiced response that made every BLINK’s heart stop when they heard it.

And it didn’t stop there. After the fan insisted, “Yup! Of course! You are!“, Jennie agreed. “I already am“, the BLACKPINK star said.

A clip of the interaction was uploaded to Twitter racked up over 200,000 views and more than 20,000 likes. In the responses, fellow BLINKs shared how floored they would’ve been if they were in 76-BLINK‘s place.

One even shared that they were still thinking about the interaction over a week later.

And many BLINKs—especially LGBT fans—were touched to see how Jennie played along and didn’t treat her fan any differently because of her gender.