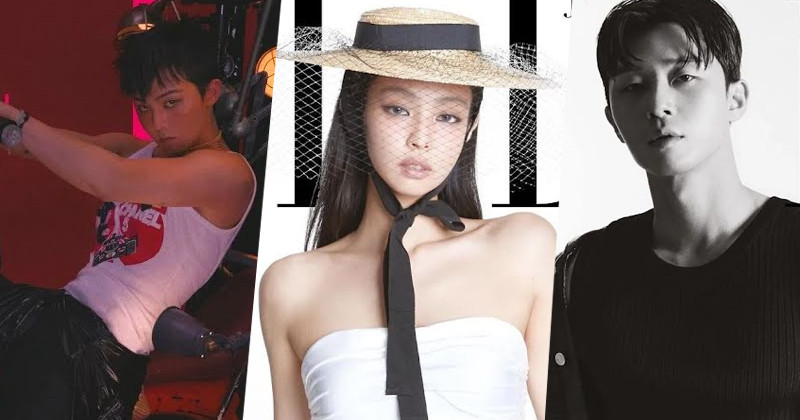 It includes some of the top idols and actors!

Over the years, ELLE Korea has provided netizens with some of the most iconic photoshoots from some of the biggest celebrities in Korea. November is extremely special for the brand as they’re celebrating their 30th anniversary and doing it in style.

For the special edition, ELLE Korea chose influential brand ambassadors for Chanel with the theme ‘The Icons,’ and here are the six stars chosen.

If you think of Chanel ambassadors, G-Dragon is always one of the first. Back in 2017, G-Dragon was chosen to represent the brand and has perfectly done that on a global and domestic scale, showcasing his true style and legacy as a “Fashion King.”

Wherever G-Dragon goes, his visuals are truly ethereal and he can exude totally different vibes. His first image is classy and sporting the iconic Chanel jacket style, he has raised a middle finger to gender norms.

Yet, the photoshoot shouldn’t come as a surprise as ELLE Korea has always loved having G-Dragon on their cover. With the second image showcasing the artist’s sexier side, the darker colors and biker vibe truly showcase his visuals and charisma.

After the success of Goblin, Gong Yoo was picked as a Chanel ambassador in 2021. In particular, he was chosen as the face for fine jewelry and watches, which isn’t shocking as the actor always looks expensive AF.

Although one of the oldest of the group, Gong Yoo’s photos prove he truly ages like fine wine. Both of the actor’s shots are very artsy and focus on more unconventional poses that show less of the actor’s visuals but more of his vibes.

Even in black and white, Gong Yoo truly shines with his youthful visuals and mysterious aura. The simple outfit of a plain white turtleneck just adds to the mystery and cements the theme of “Icons.”

Since debuting, BLACKPINK’s Jennie has showcased her influence with top brands, and Chanel is no different. Along with her campaigns and promotions, Jennie has been the perfect ambassador for Chanel at global events, such as Fashion Week.

In the cover image, Jennie looks like a true angel dressed in white. Her ethereal visuals look truly pure and innocent as the idol’s visuals’ stand out against the white and simplistic set up of the cover.

Yet, her second image is a total contrast with a burst of color, showcasing Jennie’s more sexy and sophisticated image. Wearing a lace dress with luxurious surroundings, it’s truly a contrast to her cover photo.

In 2019, Kim Go Eun was picked as one of the ambassadors for Chanel and was truly the perfect fit. Whether in photoshoots or at global events, the actress never fails to shine with her unique visuals and charm.

With the black turtleneck contrasting the white background, Kim Go Eun looks like she came straight from a Hollywood photoshoot. Her natural visuals truly shined, and the watch adds a modern twist to a classic pose.

Like the other stars, the second image is more natural and shows off Kim Go Eun’s beautiful and infectious smile. With a more 1970s vibe, Kim Go Eun’s visuals work perfectly with the concept.

Actor Park Seo Joon became the brand ambassador for Chanel’s beauty range, particularly being known for promoting the brand’s iconic perfume. Over the years, he has wowed netizens with his flawless visuals that truly represent the classic vibes of Chanel.

So, it isn’t surprising that Park Seo Joon’s pictures match that vibe. The cover is in black and white, allowing the actor’s visuals to truly shine without being distracted by color.

Yet, color brought his face to life in a close-up shot that not only emphasizes his sharp facial features but looks like something out of a Hollywood movie.

Unlike the other ambassadors, both Lee Sung Kyung’s photos are quite bright and bold. With a close-up shot, the white parts exposed almost look like a magazine cut out, highlighting the bold colors and styles.

In the next image, Lee Sung Kyung’s vibes are more retro, with sequins and more patterns in her look. The simple setting of the backdrop creates a theatrical atmosphere and showcases the actress’s visuals.