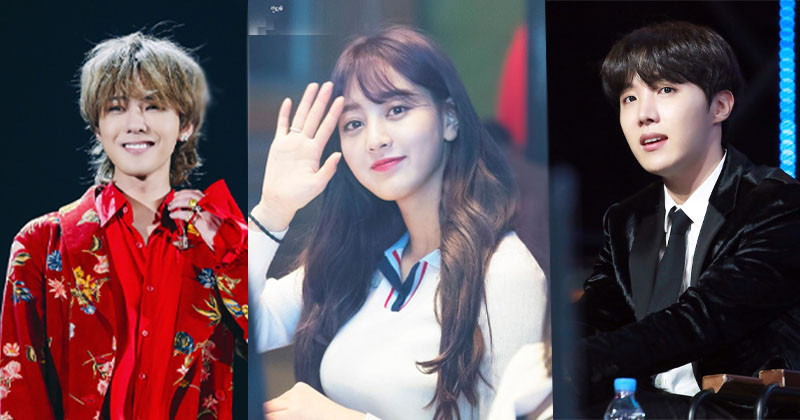 Recently, Idol Chart conducted a survey. This survey is about which idol is the most financial-savvy and would be most likely to have an affinity for stocks and real estate. Here are the fifteen idols who received the most votes from fans

Song Mino is a true financial wizard! Not only does the idol earn royalties as a producer, but he also earns from his endorsements! He is now the face of the game "Penta Storm: The Strike of Kings" and Lotte's "Let's Be" coffee. He is the ambassador for Burberry and has walked the runway for Louis Vuitton. He even released a collaboration with the brand Gentle Monster! Besides, Mino is also a photographer and painter.

Lee Chanhyuk not only earns from his work as a member of the sibling duo AKMU, but he also make a lot of money from royalties of all the songs he wrote and produced! He not only writes and produces all of AKMU's materials, but he has also produced and written music for Younha and Bang Yedam.

Sehun is an idol and actor, but he not just earning money from that, he is also a recognized songwriter in the KOMCA! He has fourteen songs that he is credited with co-writing and co-producing, meaning he can earn royalties from those songs. He is also the brand spokes perform for Dr.Jart+'s China region, and he is also a brand ambassador for Ermenegildo Zegna and Dior Men.

Jisoo is now an idol and actress! And in 2020, she also become songwriter, having co-written parts of BLACKPINK's song "Lovesick Girls." Before her debut, Jisoo also made money by acting in CFs. Now, Jisoo is the face of South Korean cosmetics brand Kiss Me and is the brand ambassador for Dior and Cartier.

In 2018, Seulgi was selected as Converse Korea's first female brand ambassador. In 2019, Seulgi was named the ambassador of L'Occitance X OMY's "City Palette" campaign. That's a lot of money she can make from become ambassador.

Shownu is well-known as a singer and dancer and a member of MONSTA X. However, and he used to do some solo activities! He has worked on drama soundtracks and has appeared in many variety shows. The idol has even worked as an audiobook narrator!

This list will not be completed without G-Dragon? G-Dragon is not just an artist. He is an entrepreneur. In 2012, G-Dragon built a pension hotel that people can stay at. In 2015, he opened up a cafe called Monsant Cafe. He opened the second one in 2017, named Untitled, 2017. G-Dragon has various endorsements and is said earned USD 1.5 million with each endorsement. To name all of it would take forever - but let's say that G-Dragon definitely is not struggling!

Taeyeon earns as both an idol and as an actress. She also previously earned as a radio show host in the past. On top of that, Taeyeon is known as a "completed piece" that fits roles as an artist, beauty icon, and fashion trailblazer. She has been the face of numerous cosmetic brands, such as Natural Republic, Banila Co., and Missha. She is also the face of Jeju Samdasoo, Kakao Games, Pais Baguette, and more.

Suzy has made a name for herself as an actress and singer. On top of that, Suzy is known as one of South Korea's "CF Queens." In 2013, she made more than 10 billion won with 14 endorsements alone. She promoted numerous brands from cosmetics, apparel, to even sugar!

Jihyo is known as TWICE's hard-working leader. The idol not only makes money as an idol but also as a songwriter. Jihyo is credited with co-writing eight TWICE songs, with four of those songs have been entirely written by Jihyo herself. She earns from the royalties of all those songs.

Ong Seongwu is quite a busy boy! He debuted and promoted with the project group up until their disbandment. Following the group's dissolution, Ong Seongwu pursued a career as an actor and saw success in that industry. After that, he debuted as a soloist. With all the projects One Seongwu has successfully pulled off, it is no surprise he is getting that bread!

Lee Daehwi is the second former Wanna One member on the list, and it is no surprise why! Beside promoting with AB6IX, Daehwi is the face of Fanta pineapple flavor. He is also a registered songwriter at the KOMCA and has writing credits for 29 songs! He earns royalties from those songs.

J-Hope is also known as the richest member of BTS. Besides promoting as a group member, J-Hope is credited as a writer of over 100 songs, meaning he earns royalties from all those songs. He has written songs for himself, BTS, and Jo Kwon. In 2016, J-Hope purchased a luxury apartment in Seoul worth USD 1.6 million.

Young Tak is a trot singer who gained fame after winning second place on the Mnet show "Mr. Trot." Besides his appearance on the show, Young Tak has appeared in a lot of variety shows and made cameos in many dramas, which he has earned from.

BTS's golden maknae ranks at the top! He is just only 23-years-old but is already a millionaire! He is also a member of the KOMCA and is credited with writing eighteen songs. He is earning money from the royalties of those songs. In 2019, he bought a luxury apartment worth USD 1.7 million. After that he lease the apartment and earning money from that.