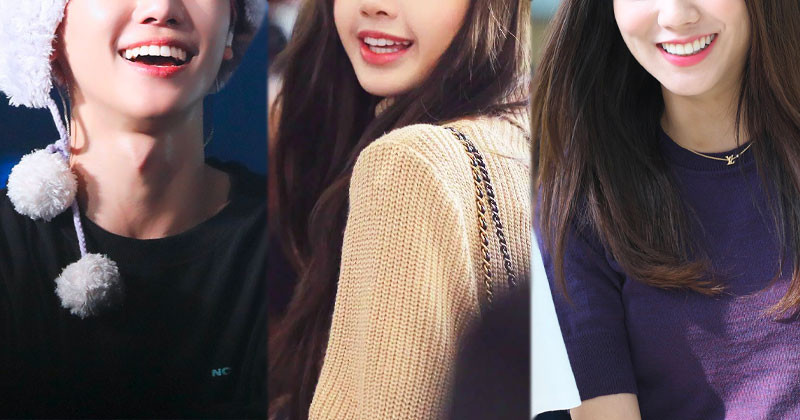 A bright smile is a magical cure to anyone's ould\

Jisoo is considered to have such an outstanding visual and aura. However, she even shines more when she smiles. Whether it's a gentle smile or comfortable laughter, she still looks beautiful and attracts anyone's attention. Imagine having a genius face with that charming smile. No wonder she is usually called fairy.

It's like V's smile can convey joy to viewers, so when you want to relax or "lift up" the spirit, it's better to look for photos or find a clip of V smiling. The stage name V is the opening letter for the word "Vitamin", just looking at V will immediately feel "refreshing" and refreshing.

Lalisa Manoban seems to possess many advantages when she has a good body ratio, amazing dancing skills, and a sharp face now has an anesthetic smile. Normally, she's cool and playful, but when she smiles, Lisa becomes as cute as a baby for fans to pamper right away.

The former center of Wanna One group Kang Daniel has a smile that, if you call it beautiful, is not too beautiful, it must be super cute. Who would have thought that a guy with a muscular body like this, every time he smiles, "transforms" into a "cute cotton ball" right away. It was also thanks to this smile that Kang Daniel received such intense love from the public.

Because she owns the trademark rabbit tooth, Nayeon has a beautiful smile, it's addicting to look at. Every time she went on stage to perform when she came to Nayeon's part, she smiled once, and then fans only "lost their hearts". No matter how much the image changes, Nayeon's lovely image with a bright smile is still the best.

Write as Jaemin - call it the most beautiful smile. Yes, the idol with the most beautiful smile in K-pop today for many fans is NCT's handsome male - Jaemin. Jaemin's brilliant smile appeared since he was a baby and has followed him to this day. From time to time, watching videos of Jaemin smiling, fans seem to love that smile even more because it's as bright as the summer sun.

Referring to a beautiful smile, lots of people must mention Red Velvet's maknae - Yeri. The Korean public often praises Yeri's smile for her radiance and vitality. Yeri's smile also changes year by year, in the past she was cute and innocent, now she is more mature and sexy.

EXO's main vocalist's smile is probably the most innocent and pure smile in K-pop. It's kind of like a child's smile, no worries, just eating and playing.

This year is 30 years old, but Yujeong looks much younger than her real age because of the bright smile she possesses. Ever since Brave Girls popped up in early March, Yujeong has always been in the Top 5 of individual girl group members' brand reputation rankings. In it, her smile is always mentioned constantly because anyone who sees it is immediately impressed. So, even though she's late in popularity, Yujeong will be popular with Koreans for a long, long time with a look that matches their taste.

>>> See more: Top 7 K-Pop Idols Who Have Sported The Best Hairstyles In K-pop