BLACKPINK’s Lisa Has One Thing She Can’t Live Without, Here’s What It Is 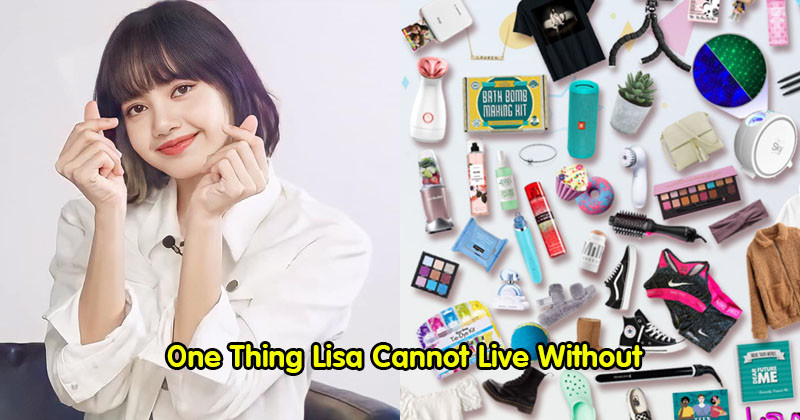 It has something to do with her routine.

BLACKPINK‘s Lisa may be an ultra-mega star, but her morning and night routines are simpler than some may expect. She happily shared what her daily rituals are in an interview with Penshoppe TV.

As a busy celebrity, Lisa needs to take care of herself from the inside out in order to give her best. She makes sure to start her day with self-care steps.

I don’t really have a defined routine. But I try to take some vitamins when I wake up [and] drink a lot of water.

In terms of her night routine, the idol revealed that she has one product that she can’t live without: lip balm! Besides using a face sheet as the point of her skincare routine, she needs a little moisturizer for her lips.

Before I go to bed, I use a face pack. And I love lip balms. My lips are super dry. If I don’t have that lip balm, I can’t live without it. It has to be that one.

She loves it so much, she makes sure to stock up whenever she can. She’s also not shy to ask her friends to mail her some whenever she’s in Korea.

So mine, I couldn’t find here in Korea. So when I go overseas, I have to get that. Or maybe my friends send me some.

Lisa said that her nightly ritual is not too complicated, with only two necessary steps: “So my night routine is just pack and lip balm”. Without the latter, she feels incomplete!

Check out the full video below!

BLACKPINK’s Lisa Reveals The Member She Is Closest To

During an interview on Line TV, Lisa was asked various questions, one of which was, “Which member that you’re closest to the most?” When Lisa got asked this question, she began by stating that she’s close to all the members.

However, if she had to pick one member, then she would pick Rosé since they’re the same age and can talk about everything with each other.

Lisa and Rosé have spent many days at their dorm together, which helped strengthen their bond.

Lisa also shared that if they want to have a meal, then they would just go and then immediately come back to their dorm.

Many BLACKPINK fans already know that Lisa pays extra care about her bangs as she mentioned on one episode of 'Knowing Bros' that she might think about opening her bangs halfway if she was given 5 billion KRW (4,593,703 USD).

BLACKPINK Lisa has been known for her signature straight bangs as she maintained the look since her debut.

Many BLACKPINK fans already know that Lisa pays extra care about her bangs as she mentioned on one episode of 'Knowing Bros' that she might think about opening her bangs halfway if she was given 5 billion KRW (4,593,703 USD).

Nonetheless, Lisa was recently seen with her forehead revealed, which made fans lovestruck for the artist once again. Lisa showed off a more feminine and mature beauty as she parted her bangs to the side showing off her beautiful forehead.

Do you love Lisa no bangs?

Many people who are insecure about their large foreheads cut bangs to cover them up. However, RareLee insists that that’s certainly not the case for Lisa. On the rare occasion the main dancer has been seen with her bangs brushed aside, it’s clear her forehead is the perfect size.

Instead, the style consultant explained that Lisa’s preference for bangs is down to a completely different facial feature: her eyes. The BLACKPINK star is known for her beautifully big and round eyes, which have earned her the nickname “Living Doll”.

However, there’s something else that’s particularly unique about them—the gap between Lisa’s eyebrows and her eyes is quite short. According to RareLee, a longer distance between the eyes and eyebrows creates a “soft and serene” look. A shorter distance, on the other hand, creates a charismatic, “boyish” charm.

The style consultant went on to explain that full bangs obscure the distance between Lisa’s eyes and eyebrows. This accentuates the doll-like image she’s known for, creating a perfectly chic and sweet aura.

If Lisa was to brush her bangs aside, her image would become stronger and more sexy—especially when you take her arched, dense eyebrows into account. While there’s certainly nothing wrong with a sexy vibe, it appears that Lisa prefers the lovely and soft look that full bangs bring.

Perhaps she likes it better when all her sexiness comes from her incredible dance talent!

Watch the full video for yourself here: