BLACKPINK Jennie Chose This Song Has Harder Choreo, Between “Whistle” and “BOOMBAYAH” 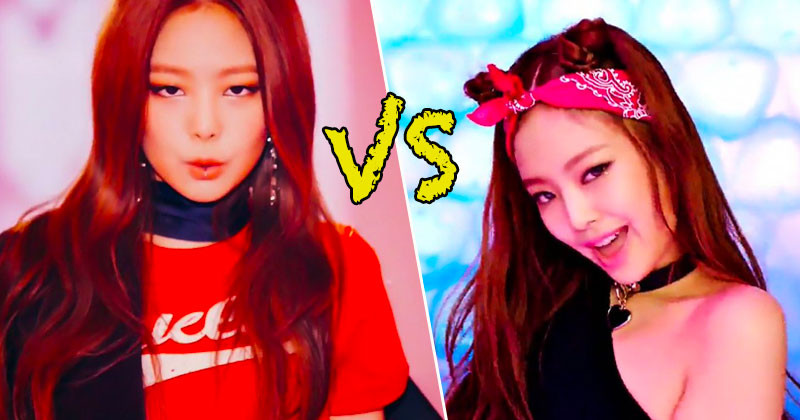 Which one do you think is harder?

BLACKPINK made a splash in the music scene when they debuted on August 8, 2016. They had dual title tracks: “WHISTLE” and “BOOMBAYAH”. They were equally popular, with the former gaining them their first win and the latter being one of the only K-Pop music videos to reach over a billion views. At that time, BLACKPINK owned the title of "Monster Rookie" when receiving PAK when just debuting!

Both of their tunes and dances solidified them as a certified “girl crush” group. They were not, however, equal in difficulty. Jennie compared them in the online broadcast which celebrated their second year anniversary. She and the others had to answer the questions written on the Jenga blocks they gathered.

The question Jennie was faced with was, “What’s the song that has the most challenging choreography?”

At the time, their options were limited to performances including “WHISTLE”…

Without thinking too hard, she named “WHISTLE” as the most challenging while “Forever Young” came as a close second.

She explained that having to sing while dancing was tough. As it was a slower song than most, they needed to be more careful with their notes.

"‘WHISTLE’ requires inner strength. We need to breath when singing."

It was an easy choice for her: “I always think ‘WHISTLE’ is harder than ‘BOOMBAYAH'”. Though the latter is visibly more energetic, it’s actually harder for the girls to control their breathing with ‘WHISTLE’.

Looking at their ultra-precise choreography, it’s easy to see why it was Jennie’s pick!

Check out the full video of their chat below!

BLACKPINK Could Be Nominated for Grammy Next Year, According to Experts

After BTS‘s “Dynamite” scored a much-deserved nomination for “Best Pop Duo/Group Performance” at the 2021 Grammy Awards, all eyes are on K-Pop’s biggest international girl group: BLACKPINK. But what do they need to do to get their own nomination next year? Four experts in the field explained all.

For one, IZM music critic Jung Min Jae thinks that releasing a “more impactful hit song” could push BLACKPINK into the Recording Academy’s field of vision. According to Jung, BTS’s “Dynamite” was a particularly impactful track, soaring to no.1 on the Billboard Hot 100 chart and capturing some interest from the international general public.

In comparison, Jung states that BLACKPINK’s biggest US hit of the year, “Ice Cream” with Selena Gomez, didn’t make the same waves. It would be unfair to dismiss the incredible success of “Ice Cream”, which broke the K-Pop girl group record when it reached no.13 on the Billboard Hot 100.

However, Jung noted that the song dipped 36 places in its second week, showing it didn’t capture the public’s attention for long. If BLACKPINK could reach a higher peak on the Billboard charts with their next song, Jung thinks they’d certainly be in with a chance for a “Best Pop Duo/Group Performance” Grammy nomination. After all, he said, “BLACKPINK is [already] standing out in the US“.

That said, Jung doesn’t think a bigger hit would be enough to propel BLACKPINK onto the nominations list. He also claims that the group needs to show more “artistic integrity” to impress the Grammys.

The awards show is known for valuing creativity and active participation in music, and well-known Billboard K-Pop columnist Jeff Benjamin agrees that BLACKPINK’s artistry is holding them back. He noted that members Jennie and Jisoo both participated in songwriting for “Lovesick Girls”—a truly “impressive achievement” that begins to disprove many of the misconceptions about K-Pop idols.

However, Benjamin went on to say that the members’ participation is rarely brought up in interviews. He believes that more focus on their artistry when communicating with US media would help the Recording Academy see BLACKPINK as credible pop artists.

Of course, it’s not all down to the group themselves. Asian Agent promotional agency founder Danny Lee has worked with idol acts like BLACKPINK and (G)I-DLE as well as Grammy-winning US artists like Black Eyed Peas, and he thinks it’s all down to the Recording Academy. Lee pointed out that there’s never been an American female pop group nominee for “Best Pop Duo/Group Performance” at the Grammys, so a Korean girl group is at an even greater disadvantage.

University of California, San Diego professor and Korean pop culture expert Patty Ahn agreed. According to her, BLACKPINK doesn’t need to change—the Grammys’ system does. In her eyes, Asians, Asian Americans, and female artists of color, in general, have struggled to receive the nominations they deserve at the Grammys, and BLACKPINK is just another example of the long-standing issues.