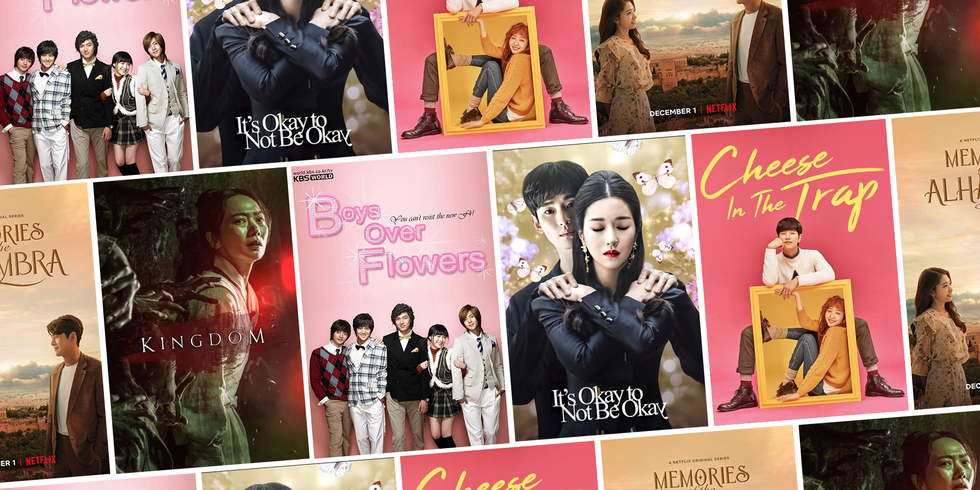 These are addicting. Don't say we didn't warn you.

While the South Korean TV and film industry has been around for over half a century, the last two decades in particular mark a rise in global recognition of the incredible body of work—culminating in a historic win for Parasite at the 2020 Academy Awards and South Korean actress Yuh-Jung Youn's win for Best Supporting Actress for her work in Minari at the 2021 Academy Awards. And, fans of Money Heist, a popular Spanish show on Netflix, may have heard that a Korean remake of the heist drama is coming out this year.

With all of that in mind, whether you're looking to dip your toes into K-dramas, or you're already a fan seeking more highly-rated, easily streamable options, here are 10 of the best Korean dramas that you can watch on Netflix right now—from romantic comedies, to superhero flicks, zombie horror shows, crime-busting detective thrillers, historical fiction and more. Pick a genre, and settle in for a marathon, because we can guarantee you're going to find your latest binge-worthy addiction.

In this fairy tale, an empathetic health care worker with a tragic past meets a children’s book author with a personality disorder. As the two get to know each other, they form a slow-burning romance that helps them both emotionally heal and move forward. The New York Times named this romantic drama series one of "The Best International Shows of 2020."

The Korean horror series reached #3 on Netflix's Top 10 list shortly after it's release in December 2020. Those who love the zombie genre will get hooked on this apocalyptic show that follows the life of Cha Hyun-soo (Song Kang) who moves into a rundown apartment complex after his family is killed in a car accident. As people in the city start to turn into terrifying monsters of various forms, Cha and his fellow band of misfit survivors have to fight to protect humanity.

Sorry in advance, but once you start this series, you'll be binging it all night long. That's how addicting this Korean drama is, starring leading actor Lee Seung-gi as a stuntman who finds himself engulfed in a dangerous web of corruption and terror as he tries to get to the bottom of what happened in the plane crash that killed his nephew. In this spy-meets-thriller-meets-romance series, Vagabond has something for everyone.

One of the newest Korean dramas that's garnered tons of views in Korea, Crash Landing On You actually features actors from Parasite. A dramatic love story, the series tells the tale of a South Korean heiress to a large conglomerate who, while paragliding, accidentally crash-lands in North Korea. But don't worry, she meets a North Korean army officer who protects her and they begin a love story despite political strife.

To the Little Women fans—you will want to give this Korean drama series a shot. Set in the Joseon Dynasty, noble lady Goo Hae-ryung is 26, single and fights to be recognized for her work as a historian. Enter the handsome Prince Yi Rim, who secretly writes romance novels under a pen name. Can the two find true love despite the societal risks? You'll have to watch to find out.

Korean media has dubbed the star actress in this series, Gong Hyo Jin, the queen of romantic comedies, so you know it's going to be good. When the Camellia Blooms is ultimately an incredible story of love, told through the dizzying plot line involving a serial killer, a single mom, social stigma, and small town drama. Hooked? Us too.

Addicted to those dramatic political TV shows like The West Wing or House of Cards? Chief of Staff will the hit the spot. Featuring an ambitious political staffer who pulls the strings behind the scenes while trying to climb his way to the top, the series will have you trying to figure out who is going to outwit the other.

The K-drama was the first Netflix original Korean series to stream on the platform, and it has garnered positive reviews. Kingdom doesn't fit neatly into one genre, fusing political royals as well as supernatural themes into a thrilling TV series. Featuring an A-list cast and incredible visual effects, follow the journey of Crown Prince Chang as he embarks on a mission to discover and put an end to a rapidly spreading influx of zombies.

Based on the hit U.S. TV series Younger, this Korean drama follows a young and gifted top editor at a publishing company who finds his life entangled with a former copywriter who desperately wants a job. What happens when they begin to realize their true feelings for each other? A great rom-com, that's what.

Contrary to its name, don't be expecting sunny days ahead in this Netflix original series that tells the story of Korea’s Joseon Dynasty era. History buffs will enjoy delving into this suspenseful, grim but also quietly romantic tale of activists fighting for Korea's independence. In addition, The Korea Times praised the series for its strong female characters.