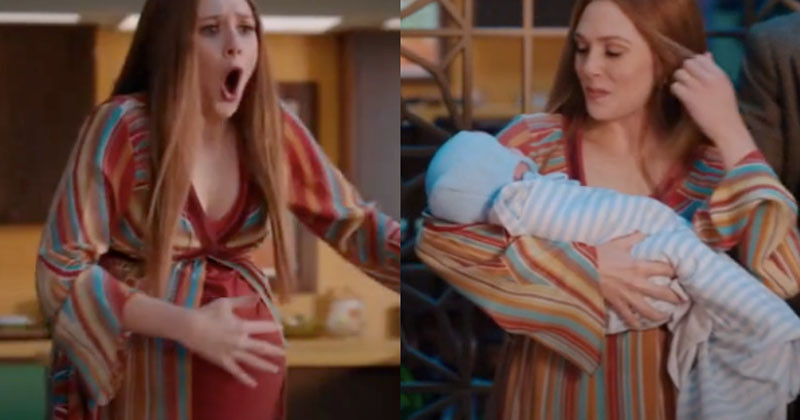 Marvel TV blockbuster WandaVision has officially released episode 3. Continuing the story of the previous two parts and still maintaining the humorous, bizarre sitcom style, episode 3 of WandaVision contains a series of related details. to the birth of the witch Wanda. In addition, the residential area of ​​Westview is more and more strange, as well as the interference of the mysterious SWORD organization in the life of Wanda - Vision is getting stronger.

The episode opens with 1970s style, with colors and a somewhat different house setting. Wanda, right after she became pregnant, her pregnancy developed significantly, from morning to afternoon, her belly was as big as her belly. Even Vision's calculations could not keep up with Wanda's fast pregnancy speed. Whenever he feels the pain of pregnancy, Wanda's house has many strange events: rain falls in the house, furniture explodes, strange creatures appear ... When Vision expressed his insecurity and arrested curious about everything going on, the movie suddenly "rewinds" and all his thoughts seem to disappear.

While Vision rushed to find the doctor to deliver her, Wanda stayed home to welcome her unexpected neighbor, Geraldine. This stranger was somewhat nosy, but appeared just when Wanda fell asleep. Geraldine helps Wanda give birth to a baby, named Tommy. Moments later, Wanda suddenly had another pain and gave birth to another baby. This time, Vision was the midwife and the baby was named Billy. Remarkably, the two children were born strangely large.

At this point, Vision began to detect many strange movements of the neighbors. They seem to be trying to tell him something, but are still extremely scared and stopped. In the house, Wanda, after giving birth to two twins, suddenly mentioned his brother Pietro. Suddenly, Geraldine asked: "Was he killed by Ultron?". This is actually what happened in the previous Avengers: Age of Ultron movie. Wanda becomes suspicious of the strange neighbor's origins. Notably, on the neck Geraldine also wears a necklace with the logo of the SWORD organization that caught Wanda's attention.

The episode ends as Vision becomes increasingly confused about the existence of the residential Westview. At the same time, Geraldine is forcefully "blown" away by Wanda from Westview, back to the real world. She seems to be a SWORD employee trying to penetrate and prevent the expansion of energy emerging from Wanda.

Thus, episode 4 of the film promises to become even more dramatic, delving deeper into SWORD's plan as well as explaining some dramatic details in the last 3 episodes. Audiences are also beginning to analyze a series of interesting "easter eggs" that appear in the film.