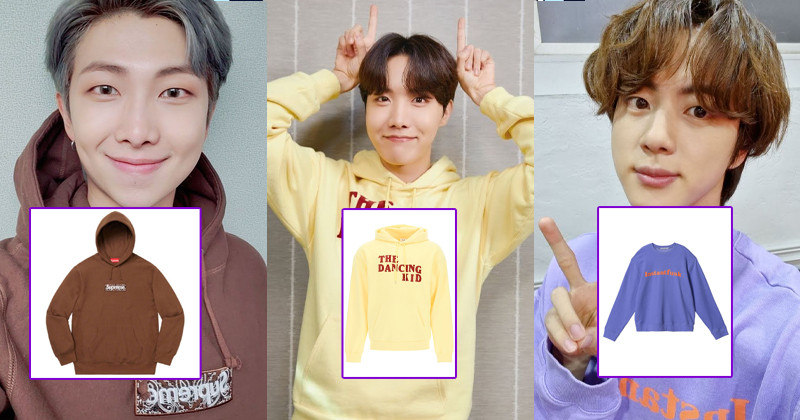 BTS is well-known for their eye-catching fashion in MVs, pictorials, as well as live stages. But their casual wear also proves they have good taste.

BTS members always know how to dress themselves in an outstanding and impressive way. If you have ever wondered 'Can I dress like them?', here's the answer. You can! Of course, if you can afford it. But you may be surprised as some of their sweaters are actually not that pricy.

Below are some of the clothes the boys wore and their prices.

Jin once wore a green sweatshirt from MSGM with a cute character logo in the front. It’s no ordinary sweater since it costs a surprising 195 USD.

For a more affordable piece, take a look at his Weverse selfie. In the photo, he dressed in INSTANTFUNK's purple '20SS Faded Logo Sweat Shirt' which is sold at 90 USD.

One can say 'Fashionista' is a part-time job of Jungkook! His sweatshirt was aptly named 'All Eyes On Me'. The piece from LAMODECHIEF is sold at exactly 96.69 USD.

Selfies are definitely his thing! Jungkook was sporty and cool in a navy 'Simbol L Logo Sweater'. It retails for ₩89,000 KRW (about 79.10 USD).

Next up, Jimin was bright and cute in a BTS live video. He looked like he was born to wear Bottega Veneta's 'Crew Neck Sweater'. If you’re interested in owning it, get ready to spend a whopping 820 USD!

Moving on, BTS’s beloved leader, RM, can definitely add 'professional model' to his resume. He looked stunning in Supreme's 'Bandana Box Logo Hooded Sweatshirt' that retails between 600 to 800 USD.

For a more fun look, he chose Marni's 450 USD 'Striped Knit Jumper'. His Japan Fan Club photo was as sweet as him!

J-Hope is always cheerful and bright, and so does his yellow version of IRENEISGOOD's 'You Good?' sweater. The 257 EUR (around 305 USD) sweater perfectly matches his sunshine personality.

In his Japan Fan Club post, J-Hope wore another bright yellow sweater, this time from luxury fashion brand CELINE. It was none other than 'The Dancing Kid Hoodie' that costs as much as expected at 690 USD.

Suga looks good in casual clothes. During his online broadcast earlier this year, he had on MASTERMIND World's 'Block Check Hooded Shirt'. It’s worth an eye-watering 1,015 USD!

Another piece can be found in the 'Life Goes On' teaser video. He wore Helmut Lang's green 'Intarsia Wool Sweater' with an adorable character print. If you’re interested in purchasing it, it’ll take you 520 USD!

Last but not least, our Taehyung looks no less than a super star in casual attire! His gray hoodie may seem basic, but don’t get it wrong —it’s CELINE’s 'Printed Fleece Hooded Sweater' that retails for an astounding 734 USD. Of course, he looked expensive in it!

When it comes to fashion, all BTS members are the princes!