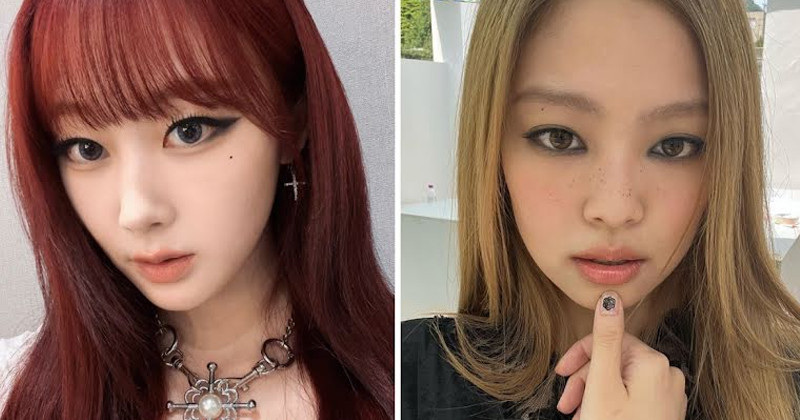 Both K-Pop idols looked amazing in the same faux-leather jacket .

K-Pop group BLACKPINK and aespa both made history as performers at Coachella.

BLACKPINK became the first K-Pop girl group to perform at the famous music festival in 2019. The group shined in their outfits both onstage and offstage as they enjoyed their time at Coachella.

BLACKPINK’s Jennie returned to the festival this year, but this time as a fan, proving herself a relatable fangirl while watching English singer-songwriter Harry Styles from the crowd.

Jennie gave fans a look at her full outfit from before she arrived at the festival with a series of photos she uploaded to Instagram.

Jennie looked stunning in a $550 USD Tea Towel Apron Top from Marine Serre. The sleeveless shirt was perfect for the hot desert venue, but she also prepared for the cooler, windy nights in the Coachella Valley.

Pictures from later in the evening showed Jennie with a faux-leather PEPPERPEPPER Pepper Racer Jacket that retails for around $335 USD. The jacket instantly elevated the trendy outfit.

Jennie wasn’t the only idol to wear the jacket while in California for Coachella. It was also worn by aespa’s Giselle!

aespa surprised fans when they made their Coachella debut this year on April 23. The group impressed fans with their performance and live vocals, even earning praise from Holly Pearson, an associate director of Coachella.

View of aespa’s Coachella performance from the audience | @aespa_official/Twitter

While in California, the members made the most of the trip, posting vlogs of the experience and their journey to LA as well.

Pictures were posted to aespa’s Twitter of their LA shopping trip, showing what Giselle wore for the outing. Giselle layered an oversized LA t-shirt with a navy, long-sleeved shirt. She paired the outfit with trendy, baggy jeans for a casual look.

Both Jennie and Giselle looked amazing in their respective outfits, each pulling off their looks with their own unique styles.