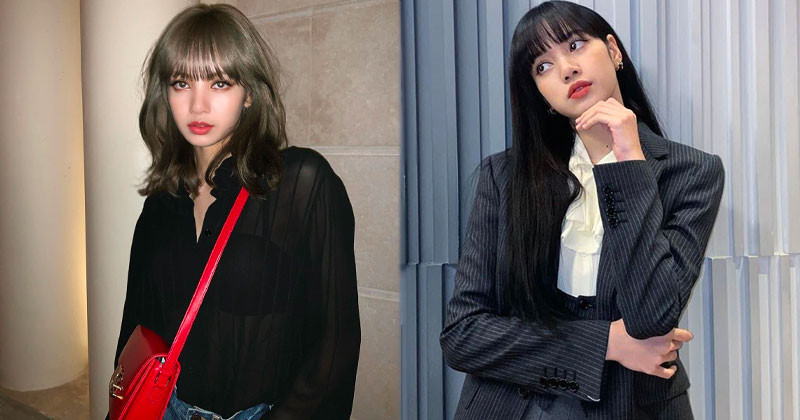 BLACKPINK Lisa can dress to impress in every single occasion. Some of her best looks, without a doubt, are from her Instagram account. If you’ve ever wanted to know how much her black clothes cost, keep on reading!

One of Lisa’s most iconic photos was her monochromatic black, white, and gray outfit. Her “Classic Jacket Tennis Striped Wool Fabric” retails for $1,750 USD.

Of course, it was from her favorite brand CELINE.

Step aside everyone, Lisa continues to slay! She looked insanely gorgeous in a €1450 EUR (around $1700 USD) blouse from CELINE.

It was none other than its “Pleated Blouse With Frill Collar.”

Lisa was soft and stunning in a casual photo outside. Her off-shoulder crop top emphasized her small waist and overall beauty.

When visiting her home country, Lisa patronized a local Thai brand, Mudse. Her dress was perfect for the beach scenery!

Her “Strap Tie-Die Dress” is the most affordable piece on this list, being sold for ฿650 baht or around $20 USD!

In another warm look taken last 2019, Lisa wore Are You Am I’s “Anke Cap Sleeve Top.”

If you’re interested in buying it, be ready to pay $90 USD.

Finally, one of Lisa’s most laid-back but elegant looks was when she wore an Alexander Wang “Snap Detail Crop Top” that costs $175 USD.

When it comes to fashion, Lisa can pull off any outfit no matter how much they cost!

BLINK Spends Over $6,200 on Plastic Surgery to Look Like BLACKPINK Lisa

BLACKPINK Megafan Spends Over $6,200 on Cosmetic Surgery to Look Like Lisa

K-pop stars are now becoming the beauty standard not just in South Korea but for the young all around the world. There are now international fans who undergo cosmetic surgery just to resemble their favorite K-pop stars.

On Monday, Apr. 12, a Vietnamese media outlet, YAN, released an article and photos of a girl who had undergone plastic surgery to resemble BLACKPINK's Lisa. The BLINK paid a huge amount to look like the Thai idol. According to reports, she had shelled out 150 million dongs, approximately seven million Korean won. This is equal to $6,240.44.

According to the news outlet, the girl was a huge fan of Lisa, and she had admired her so much she wanted to resemble Lisa's exotic visuals. Following her surgery, the girl shared selfies on her social media to show her new look. While she does not look exactly like Lisa, people are saying that there are some similarities.

The BLINK now has thick double eyelids, big eyes, a slim nose, and thick lips, just like Lisa herself does. The fan herself seems satisfied with the outcome, who commented that the operations were worth it despite the hefty price she was made to pay.

The story of the girl, who now resembles Lisa through plastic surgery, is gaining attention from Korean netizens. Some are saying that the outcome turned out great and that they would like to know what clinic she went to for future purposes. Others, however, stated that she looks nothing like Lisa and that Lisa still looks prettier.

What do you think? Do you think she resembles Lisa?

As of Apr. 2021, Lisa is the first and only K-pop idol to hit 50 million followers on Instagram.

The BLACKPINK member is one of the most popular idols overseas, according to the "2021 Overseas Korean Wave Survey" held by the Ministry of Culture, Sports and Tourism & Korea Foundation for Intl. Cultural Exchange. Lisa is the first foreign artist to ever appear on the survey and was the only BLACKPINK member to rank within the top 20.

BLACKPINK Lisa has another tremendous achievement under her belt! As of April 10, she reached 50.1 million followers on Instagram, the first K-Pop star to do so. Her fellow BLACKPINK members have the next most number of followers in the industry, with Jennie at 43 million followers and Jisoo and Rosé tied at 39 million.

The main dancer’s meteoric rise to the top took only 34 months to achieve! To celebrate Lisa’s record, check out some of her most popular Instagram posts this year.

First up, it’s not a strange sight for Lisa to have over 6 million likes. Both her birthday post and a photo from her solo in THE SHOW made it to the club.

Just a hundred thousand more likes and you have a backstage photo of “THE MOVIE” from Lisa’s YouTube channel.

If you’re a BLINK, you probably saw her dance performance on Lilifilm Official.

THE SHOW was an online concert filled with killer clothing! Lisa’s February 4 post is the perfect example of her looking as stunning as always.

Black haired Lisa with simple clothes is something else! The straightforward photo had an eye-watering 6.5 million likes.

Lisa’s advertisements with brands like Penshoppe and Celine were able to garner an astounding 6.6 million likes.

Lisa in a bun and all black outfit is peak elegance! No wonder it had 6.7 million likes.

When it comes to unique photos, one that stood out the most was focused on her shirt, with “I ❤️ to make boys cry” written on it.

A relaxed Lisa with a cherry blossoms background is the definition of beautiful! Fans loved it too as it got 6.8 million likes.

A few hours before THE SHOW premiered, Lisa hyped up BLINKs with a classy black and white photo.

There’s definitely a trend here! Several of Lisa’s most famous posts are from BLACKPINK’s online concert, such as this “Sour Candy” picture with 7 million likes.

Of course, her heart-stopping attire in “Say So” was taken perfectly in her second most liked post.

Finally, Lisa’s most popular Instagram content of 2021 as of writing is her January 26 behind-the-scenes picture from THE SHOW. She wrote as her caption, “BLACKPINK: THE SHOW livestream on YouTube,” and it surprisingly garnered 8 million likes!

With her relaxed outfit and “no makeup-makeup” look, it was one for the books!

In total, Lisa has 14 posts that have over 6 million likes this 2021! Congratulations, Lisa!

I’m finally turning 24 today!🤘🏻
Unfortunately, I couldn’t be with my family this year. But I’m so lucky that I can still celebrate this together with you guys, Blinks💗
Thank you for making my birthday so special every year 🙂
Thanks for all the wishes