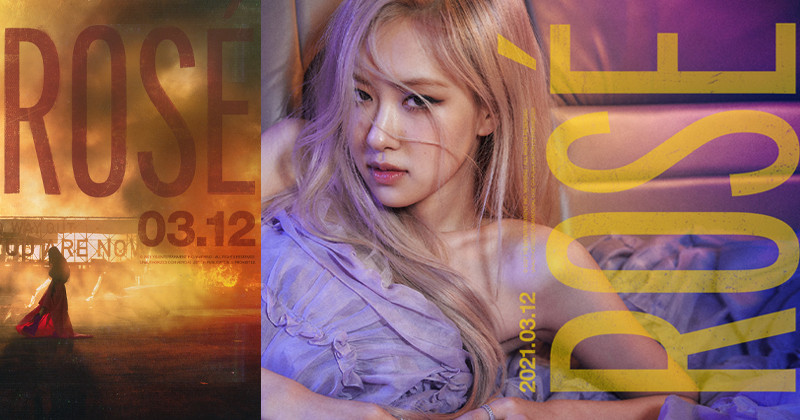 In one poster, Rosé, wearing a purple dress, gives viewers a sharp gaze with charismatic look, while in the other poster, she's seen walking in front of a fire in a red dress, heralding an intense debut MV.

It's is still unknown what format will her solo debut be. Will it be a solo full album, solo single album, or solo mini album? Regardless, expectations are rising hour by hour now as her debut day is just around the corner.

Moreover, Rosé has received much more than 40 million views just with the coming soon teaser video. As such, the poster is already drawing enthusiastic responses from global fans. Upon the release of the teaser poster, the other members also posted it on their social media, cheering for Rosé.

At BLACKPINK's first live stream concert 'THE SHOW', which was held on January 31, Rosé's solo song 'GONE' was pre-released. YG also revealed that, "All the music video filming for Rosé's solo album title track are done. It is a large-scale MV that spent huge production costs, so we are doing our best to improve the completeness of the music video. We're going to officially announce the album release schedule soon."

As a result, domestic and international attention are focused on Rosé's solo debut. Forbes, a U.S. economic magazine, even picked Rosé as one of the "K-Pop solo stars that will surprise the U.S. in 2021".

Moreover, BLINKs (BLACKPINK's fans) are interested in what records Rosé, who announced her solo debut in two years, will set as her fellow member Jennie, who become the first BLACKPINK member to go solo in November 2018, swept the major music charts in South Korea and abroad, as well as surpassed 600 million views for the MV 'Solo' on YouTube.