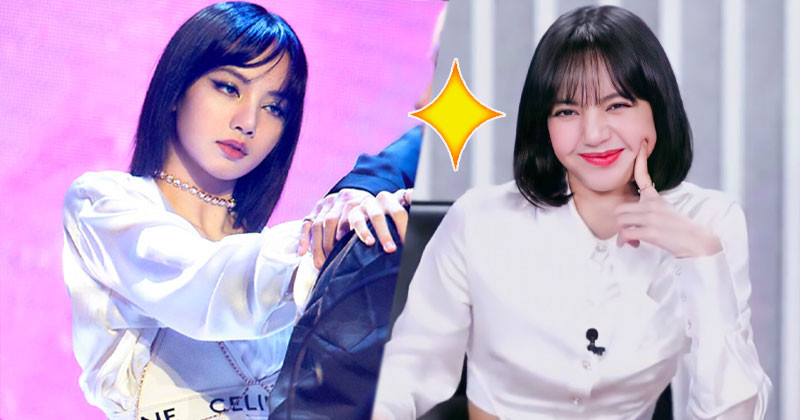 Because of having to hold the breath to sing, many people won't be able to do their best on stage. So what is the plus point to "compensate" for this shortcoming? Let Lisa tell you!

Although only debuted more than 4 years, Lisa (BLACKPINK) is currently a top Kpop idol when it comes to performances, especially in terms of choreography and stage presence. Her experiences from performing on stage were conveyed to her students through the role of a coach at Youth With You 3.

It is extremely difficult for performers to keep the column of air to dance and sing at the same time. When watching the contestants' performance, Lisa seemed to have recognized the problem and commented: "When doing the dance break, you look very confident, it seems you have practiced for many times, it looks great."

"However for the vocal part, I feel that you guys are not confident enough. I am not sure if you guys were worried that your vocals will be shaky, so you didn't use all your energy to dance or not ". - She continued.

Lisa advises: "When you don't want to use too much force to dance while singing, I advise you to use your facial expressions and charisma, that's an advantage. I can't see it yet. That, I've only seen your concern, so it's a little regretful. "

Besides having impressive dancing and rapping skills, it must be admitted that Lisa became attractive on stage partly because of her extremely diverse facial expressions. The secret to using expressions to make up for shortcomings when dancing is an interesting lesson that future idols at Youth With You 3 should keep in mind.

BLACKPINK Lisa is known for her killer dance moves and stunning fashion style. As the K-Pop idol continues to dominate audio streaming platforms and music charts worldwide alongside her other co-members, she has also been garnering more and more followers by the day.

On Tuesday, March 2, BLINKs have celebrated the latest feat BLACKPINK member Lisa has achieved recently. As of this writing, the co-member of Jennie, Jisoo and Rosé already garnered more than 6 million subscribers on YouTube.

BLACKPINK member Lisa has a total of 10 videos uploaded on her official channel called Lilifilm Official. Despite having a lesser number of clips compared to other artists, the "Lovesick Girl" songstress has amassed more than 214 million views already.

Among all the videos BLACKPINK member Lisa shared on YouTube, her dance performances video got the most views, which range from 31 million views up to 53 million views. The idol's latest video, titled "LILI's FILM [The Movie]," got more than 32.3 million views with more than 2.7 million likes and more than 275,000 comments.

Most, if not all, BLINKs are aware that Lisa set up her own YouTube channel in November 2018. Her first upload was a video called "Lili's Film #1 - Jisoo in Japan," which shows clips of her and Jisoo snacking, sightseeing and shopping in Japan as their "See U Later" track plays in the background.

At the time, Jisoo showed her support by sharing a link to Lisa's YouTube channel on her official Instagram page. As of press time, the premiere video of BLACKPINK member Lisa already amassed 3.9 million views with more than 480,000 likes and 10,728 comments.

Aside from YouTube, BLACKPINK member Lisa has also amassed a huge following on Chinese microblogging website Weibo. As of late, the co-member of Jennie, Jisoo and Rosé has more than 8.3 million followers already.

The "How You Like That" hitmaker shared a post for the first time on Weibo on Jan. 8, 2020. In a short clip, BLACKPINK member Lisa divulged that she created the account so she could maintain a closer communication with her fans who are based in China, adding that she hopes to see them as often as possible through the platform.

In February, Lisa uploaded a video titled "LILI'S FILM [The Movie] on the platform, which was warmly received by her devoted supporters. In fact, the said clip effortlessly amassed 142,000 views in just 10 minutes. As of today, the said video already got 3.35 million views with 17.4 million likes.

BLACKPINK member Lisa credited Anthony King as the director of her record-breaking video. The "BOOMBAYAH" songstress also mentioned Cheshir Ha, who was contributed to the choreography, Yeseul Kang as the producer and Destiny for the music.

On Feb. 27, Lisa shared snaps of her during some of her performances. The BLACKPINK member wrote in the caption that she hopes to be able to sing and dance on stage closer to the BLINKs very soon.