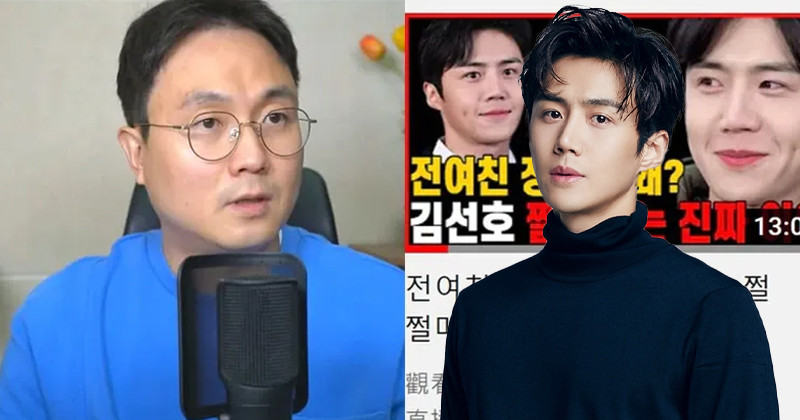 According to Lee Jin Ho on October 19, "If the identity of Kim Seon Ho's ex-girlfriend A is revealed, it will have a significant impact. If the public finds out what kind of person A is, Kim Seon Ho's image is also expected to take a hit. If Kim Seon Ho shakes off everything and faces the current situation honestly, there will be room for a turnaround."

As previously reported, an anonymous netizen claiming to be the ex-girlfriend of Actor K alleged he persuaded her to get an abortion then broke up with her afterwards. Kim Seon Ho's label Salt Entertainment made a statement on the ongoing rumors, and they've now officially announced they'll be taking legal action against the allegations. Netizens also noticed the actor "liked" the post.

With the controversy, Kim Seon Ho's past behavior on an episode of KBS' 'One Night and Two Days' is getting attention. After a producer attempted to escape the island on their own canoe, Kim Seon Ho suddenly yelled out informally, "Hey, what are you doing right now? What are you doing? From the morning." When Kim Jong Min asked him to go catch him, Kim Seon Ho spoke informally once again, saying, "It hurts so much. My back."

What are your thoughts on the rumors?

In his statement, he shared how he was sorry for his actions in the past and for disappointing his fans.

This is Kim Seon Ho.

I sincerely apologize for the delay in my statement.

A short time ago, after the article referring to me was released, I experienced that fear for the first time, and I finally was able to write something.

I had met that person with good feelings and intentions. In the process [of meeting them], I hurt them with my carelessness and inconsiderate behavior. I wanted to meet them in person and apologize first, but I have not been able to properly apologize to them and I am waiting for the time to do so.

First of all, I would like to sincerely apologize to them through this post. I am sorry for disappointing everyone who trusted me and supported me right to the end. Because there were people who supported me, I was able to stand here as the actor Kim Seon Ho, but I forgot about that. I am sorry to cause an issue to many people and the officials who I have worked with due to my shortcomings.

I would like to sincerely apologize to everyone who has been hurt. I know that my writing will not fully reach into the hearts of everyone, but I am expressing my feelings and sincerity like this. I am very sorry.

His agency, SALT Entertainment, has also shared a statement apologizing for the scandal.

We apologize for causing concern to many people regarding Kim Seon Ho’s personal affairs.

We apologize to the many people who have been disappointed or hurt by this incident.

Once again, we are sorry for causing concern due to a negative thing.