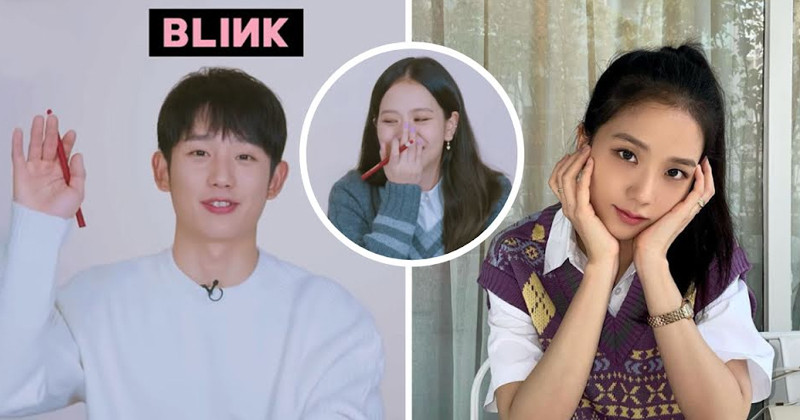 Even Jisoo was shook!

Last year, the newest K-Drama Snowdrop started airing and, despite the controversies surrounding the storyline, fans have enjoyed watching the show. In particular, they have had nothing but praise actor Jung Hae In and BLACKPINK‘s Jisoo, who made her acting debut. Throughout the show, the duo has showcased unrivaled chemistry.

Yet, as serious and intense they are on the show, the two are completely opposite in real life, showcasing a more playful and adorable friendship that netizens can’t get enough of.

Recently, Jung Hae In and Jisoo sat down in an interview with Disney Plus Korea and answered some questions about their characters in the show and about themselves.

Although the whole video was full of pure interaction, one moment stood out the most to netizens, and it was true proof that Jung Hae In is a fellow BLINK. In the second part of the video, the actors had to answer questions about each other.

One of the questions about Jisoo was her nickname, and when she read Jung Hae In’s answer, she was surprised, adding, “Okay, but this is a bit of a shocking answer. How do you know?” when he correctly put “Jisoonie.”

It could’ve easily been a guess, or he’d read it somewhere. But Jung Hae In had a full explanation that even had BLINKs shook. It was definitely worth ten points.

Rightly so, it was enough for Jisoo to confirm that Jung Hae In can be a certified BLINK.

Also, if anyone thought it was lucky, another question in that video cemented that Jung Hae In is a true BLINK, and even Jisoo acknowledges it. He was then asked something more specific, which was what Frozen-inspired outfit Jisoo wore during the group’s fourth anniversary.

Although Jisoo was shocked, Jung Hae In wasn’t as it was revealed that he got the correct answer with Else and once again showcased his BLINK status.

Of course, any true BLACKPINK fan remembers how beautiful Jisoo looked as Elsa in a truly iconic outfit that showcased her beauty and grace.

When the video was released, fans couldn’t get over just how much Jung Hae In knew about Jisoo and BLACKPINK. In particular, BLINKs themselves gladly welcomed him into the fandom with open arms.

However, it isn’t the first time Jung Hae In has proven that he might just have a secret K-Pop stan account. In the past, he’s proven that he loves K-Pop by having relatable reactions to BTS, and he’s even good friends with member J-Hope!

Hopefully, fans can see more interactions between BLACKPINK and Jung Hae In even after the K-Drama finishes. Maybe, there could even be a chance that he could appear in a music video to become the ultimate BLINK!

You can watch the whole video below.