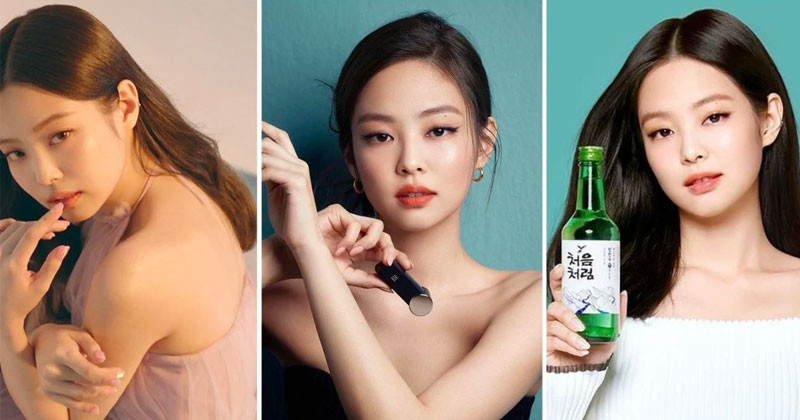 Will the title as CF Queen is taken over by Jennie, after being kept for a long time by Bae Suzy?

Calling K-pop star Jennie “popular” probably doesn’t do her justice. Besides being part of K-pop sensation BLACKPINK, which grabbed a Coachella performance and before its fifth anniversary, Jennie was the first member of the girl band to make her solo debut, and is one of the most followed K-pop idols on Instagram.

She’s always been a darling when it comes to brand endorsements too. Within just two years of her debut with Blackpink, Jennie signed a deal with domestic contact lens brand Olens, followed by beauty brand Hera the next year. Some credit Jennie for transforming Hera’s image from a brand mostly favored by middle-aged ladies to one that’s luxuriously trendy. 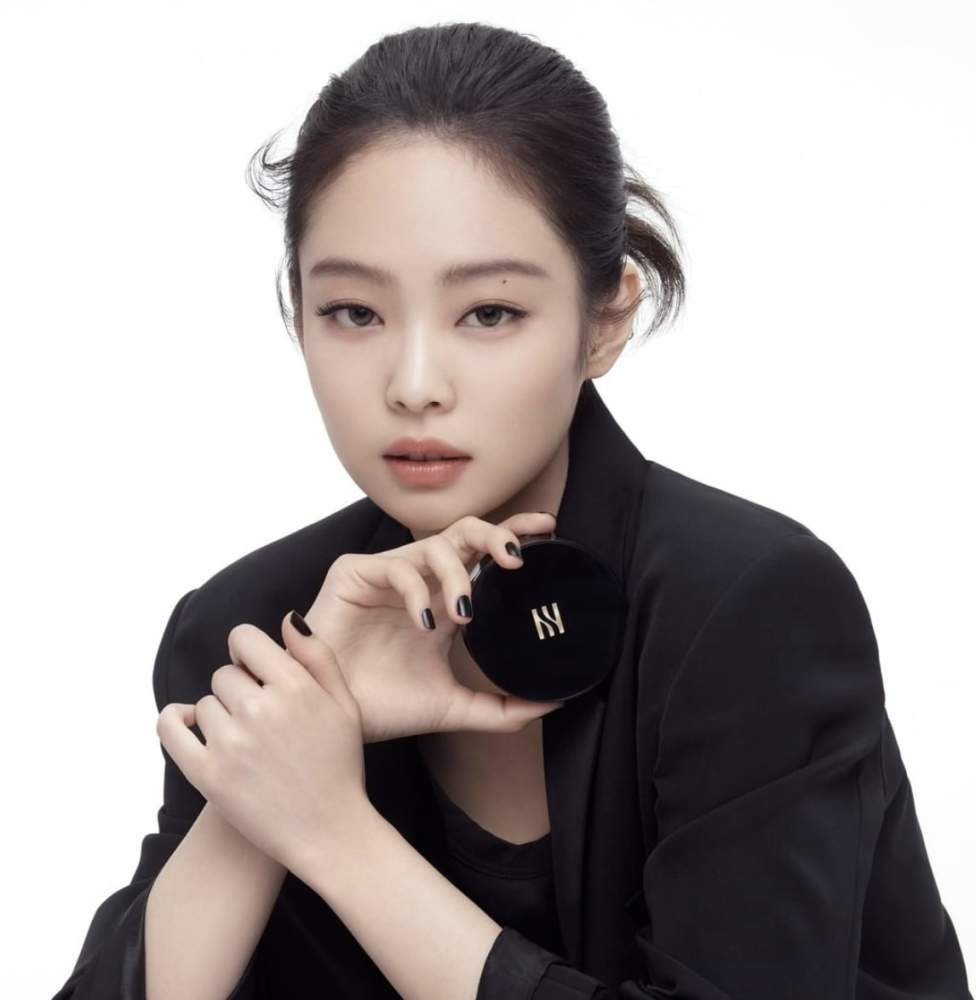 And her success with brand deals has only continued to grow. Of course, there’s her coveted spot as Chanel’s brand ambassador. But she also signed three more deals in the first half of 2021, and it’s these deals that really mark the start of her endorsement empire. Why? Each of these was previously helmed by actress Bae Suzy, who’s known as the “CF queen” in South Korea. So Jennie bumping Suzy off her throne proves just how influential the young star is.

However, Suzy and Jennie have radically different images: Suzy’s girl-next-door charm can certainly sell out products any day, but Jennie’s modern appeal might be more suitable for the growing Gen Z market.

Check out the three brand deals that Suzy and Jennie both took on below, as well as the stars’ differing promotional approaches. Vita500 is one of South Korea’s best-known energy and vitamin drinks, readily available at every convenience store. Jennie is the newest face of the brand, appearing in a commercial film and poster. This deal is special as Vita500 is a more family-friendly product, marketed as a drink suitable for all ages, and Jennie previously cultivated a trendy image almost exclusively.

Vita500 was helmed by Suzy from 2013 to 2017. She leveraged her familiar, public-friendly image to appeal to the masses, literally dressing up as an “everyman” in her commercial, donning a variety of outfits from nurse to office worker. 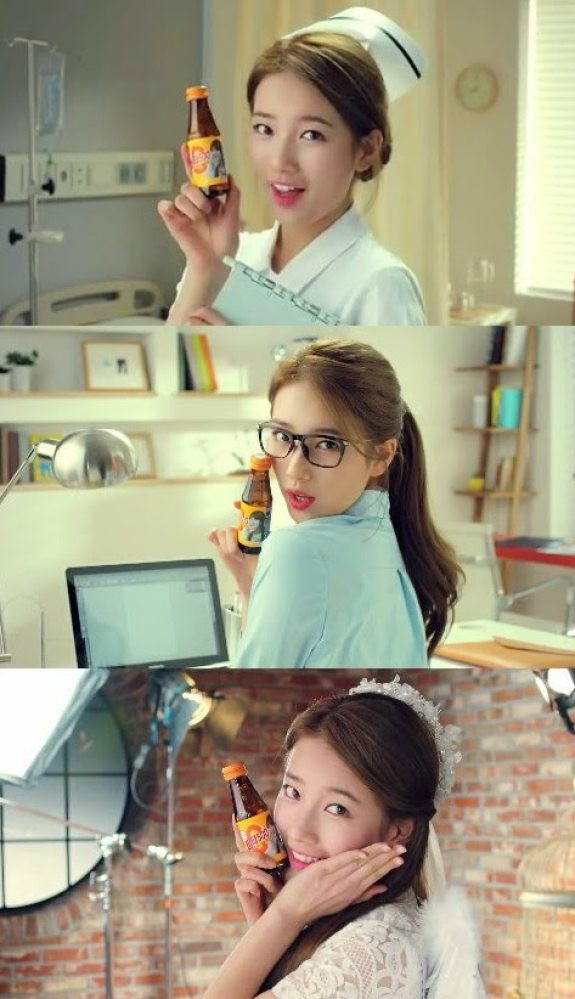 But Jennie has taken a different approach. Her advertisement focuses on health and wellness as the hot new lifestyle trend, smiling coyly mid-stretch on Pilates equipment and sifting through an enviable athleisure wardrobe. It’s almost as if she is saying, “if you drink this drink, you’ll become as fabulous as me”. 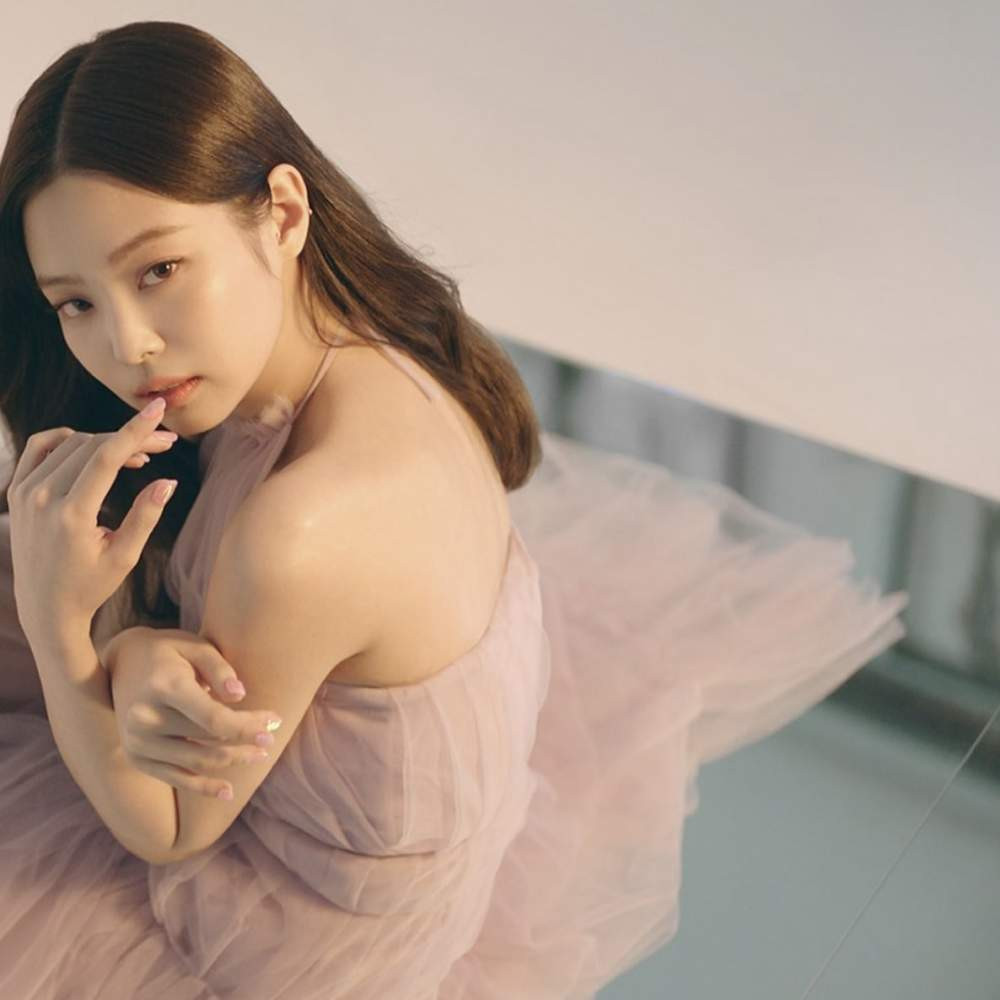 Dashing Diva is one of South Korea’s top-selling at-home nail kits. Specializing in press-on gels, the brand is available at Korean drug stores and even some convenience stores. It has since been exported across Asia as well.

The brand contacted AOA’s Seolhyun at the peak of her career, followed by Suzy from 2019 to 2020. In 2021, Jennie was announced as the new face of the brand. As Dashing Diva has only ever contracted top stars, the company clearly recognizes Jennie’s impact.

Suzy promoted the brand’s Queenston range that focuses on flashy jeweled nails. In her commercial, she said the line, “If I was only going to do just enough, I wouldn’t have started at all”.

While the range that Suzy promoted suited the opulence trend of 2020 South Korea, Jennie is promoting the brand’s cruelty-free Glaze range. The advertisement brings out Jennie’s natural charm with minimal stage props and lighting, as the 2021 trend focuses on easy-going beauty. 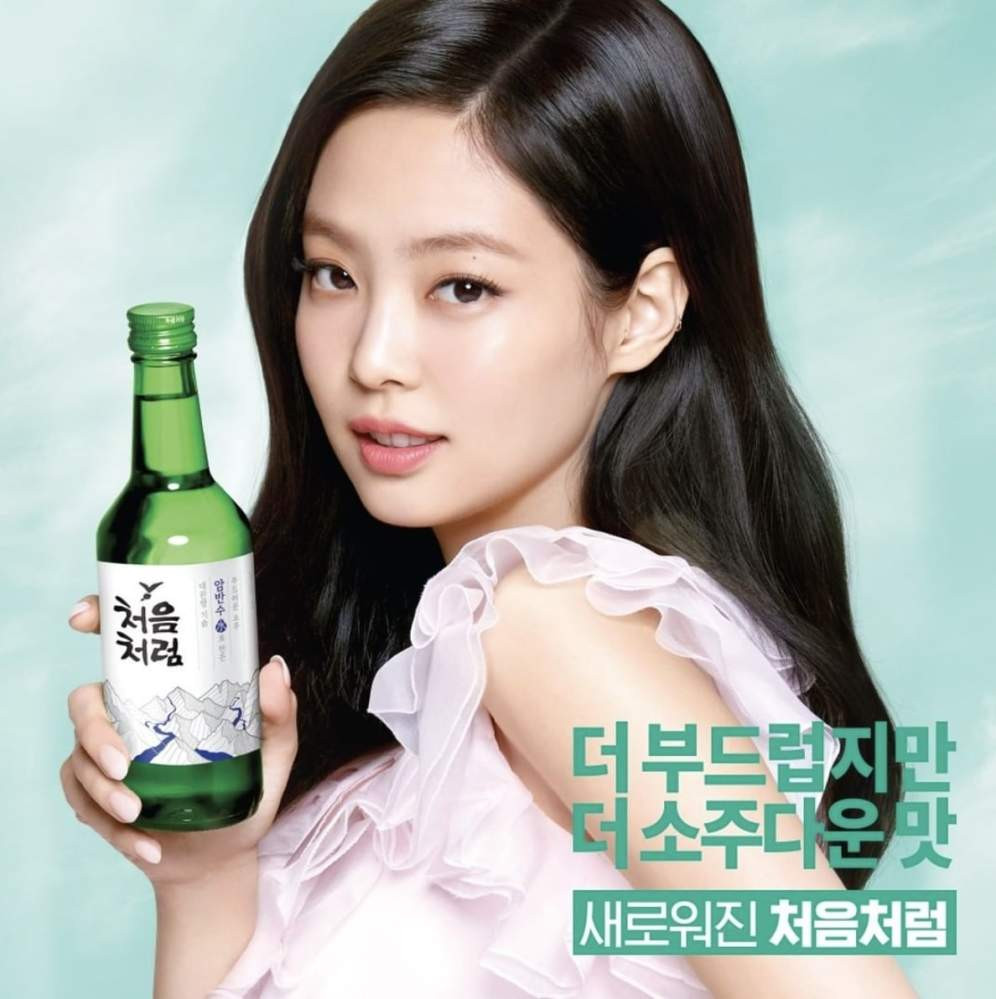 Soju advertisements are highly coveted by celebrities in South Korea, with most Koreans swearing by the home-grown liquor. While soju brands previously contracted sexier stars such as Lee Hyori, the image of soju models has been shifting, slowly but surely. 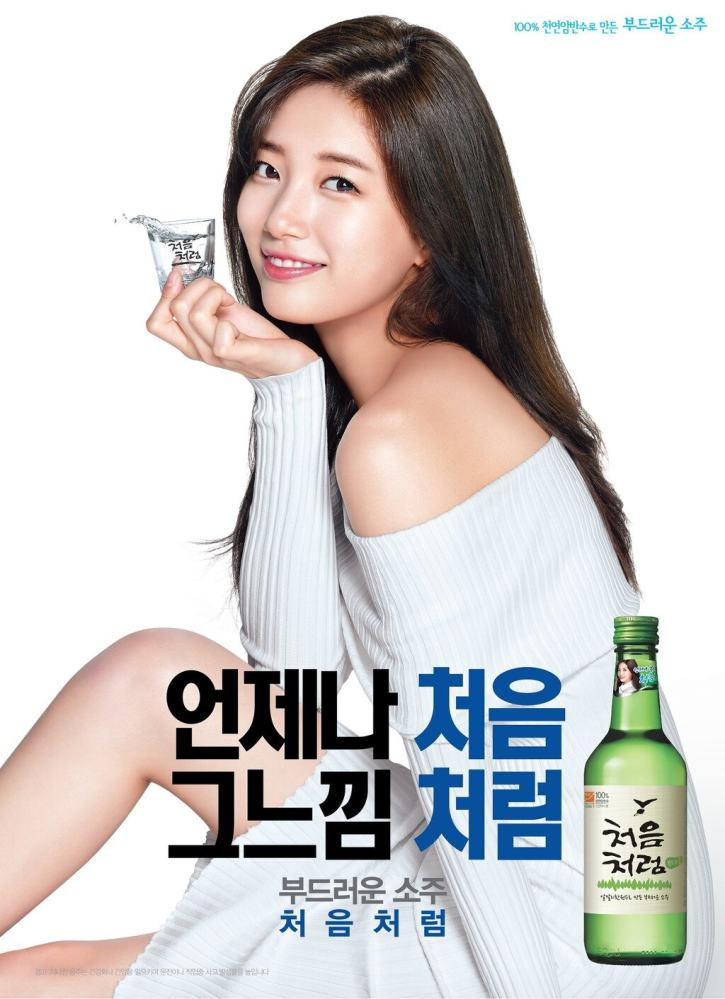 Suzy was one of the first soju models to push a more innocent look with her Chum Churum deal, which ran from 2016 to 2018. Her commercial video highlights her “nation’s first love” image; it was even filmed from the point of view of a lover.

Yet again, Jennie followed in Suzy’s footsteps. What surprised fans was that, for Jennie’s poster advertisement, the brand put her in the exact same white dress that Suzy wore. 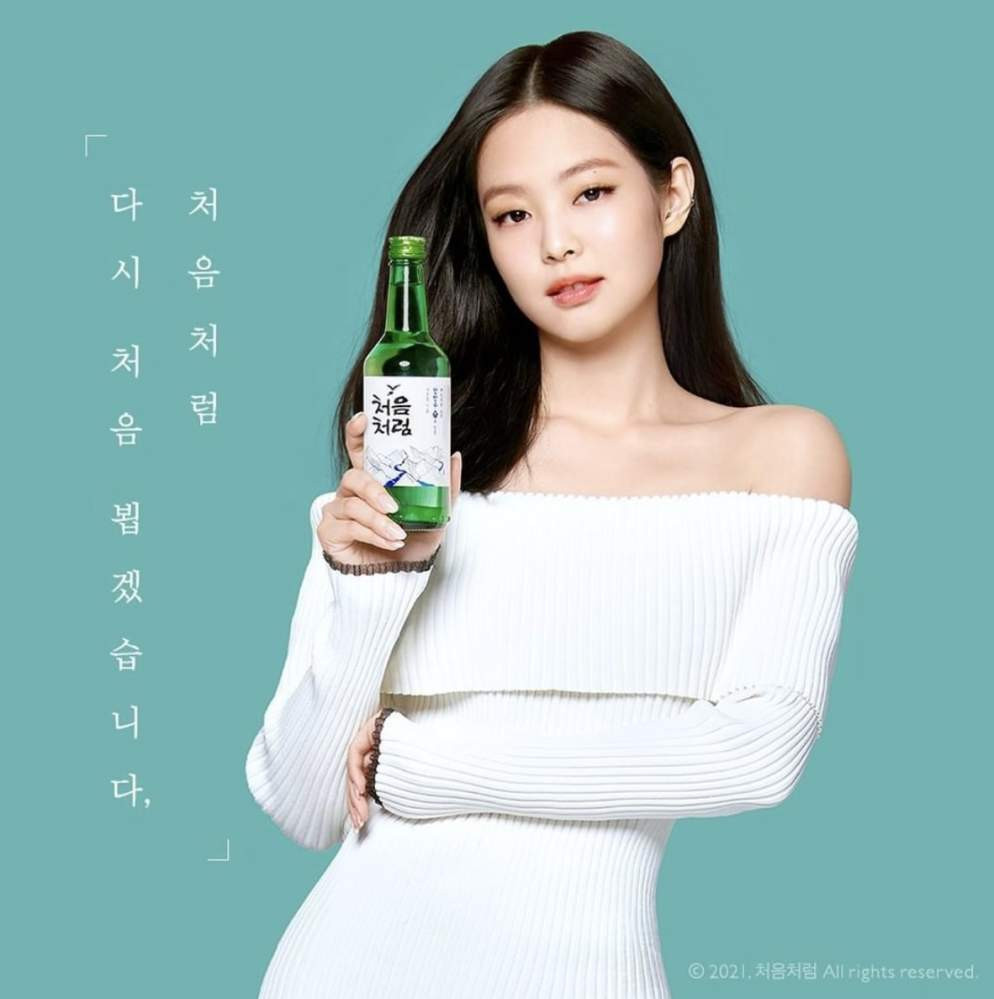 But that’s where the similarities end. Matching Jennie’s trendier image, her commercial film promotes the soju with a modern twist. Her outfit – a backless, flowing white dress paired with smokey make-up – toes the line between sexy and innocent, making the overall vibe much chicer.

Fans have observed that the brand signing Jennie and revamping its identity at the same time cannot be a coincidence. Perhaps Jennie’s image will help reposition the brand as trendier and more luxurious.